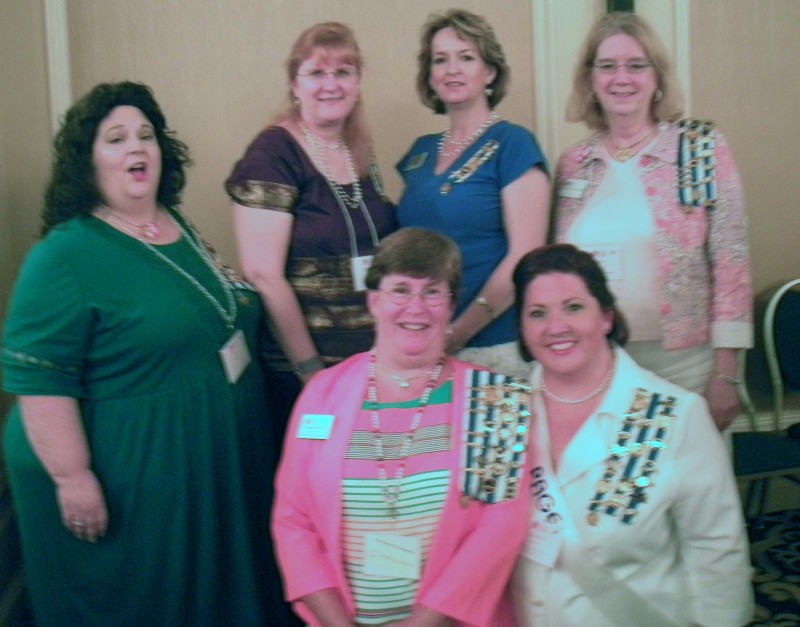 Virginia Sebastian Storage, who was installed as the Virginia DAR State Regent on June 30, 2013 at the 122th Continental Congress in Washington, D.C., presided at 2013 Board of Management Meeting held July 27, 2013 at the Kirkley Hotel and Conference Center. At the meeting, Storage outlined her ambitious state project, theme and goals to be achieved over her three-year term.

“Your commitment and dedication are essential to the success of the next three years,” she said to the large contingency assembled. “And I ask you today are you committed to this goal?”

Storage attended the first meeting of her administration with other state officers and committee chairman, chapter regents or vice regents and guests. The theme she selected emphasizes the importance of women – “Celebrating Good Women: May We Know Them, May We Be Them, May We Raise Them.”

She also outlined her state project for the next three years, which will aid the George Washington Foundation, a non-profit foundation, during their campaign to construct a replica of the 1740 George Washington House at Ferry Farm. The State Regent’s Project will provide funds to underwrite a room on the first floor of the structure.

Approximately 113 acres, including the entire length of the original Washington waterfront, are under the Foundation’s stewardship. Ferry Farm was designated a National Historic Landmark in 2000. In 2008, archaeologists working at the site, located and excavated the remains of the long-sought house where George Washington was raised.

Far from being the rustic cottage of common perception, the Washington house was a much larger, one-and-a-half-story residence, 53 feet, 8-1/2 inches by 28 feet, 4 inches, perched on a bluff overlooking the Rappahannock River. The George Washington Foundation has undertaken a landmark campaign to make Ferry Farm a destination for tourists and students alike. This multi-million dollar effort will transform the property to allow visitors to hear the family stories where they actually took place.

A native of Virginia, Regent Storage resides in Fredericksburg with her husband, Mark Storage and their 14-year-old daughter, McGowan. She has been a member of DAR for 29 years and has served the society at the chapter, state, and national levels.

Professionally, Storage is the Vice President of Administration for NSWC Federal Credit Union in Dahlgren, Va. where she coordinates the Branch Administration, HR and Training functions for more than 100 employees. She received her Bachelor of Arts degree from the University of Virginia and her Master’s in Business Administration from Averett University.

Marie Vayer-Regent, Betsy Battles-Vice Regent and four other members from the Prince William Resolves DAR Chapter were among the 297 women who attended the first official meeting of the Storage Administration at the July 27 Board of Management meeting in Lynchburg.

The National Society Daughters of the American Revolution was founded in 1890 to promote patriotism, preserve American history, and support better education for our nation’s children. Its members are descended from the patriots who won American independence during the Revolutionary War. With more than 175,000 members in approximately 3,000 chapters worldwide, DAR is one of the world’s largest and most active service organizations, and is also the publisher of the award-winning magazine American Spirit. To learn more about the work of today’s DAR, visit www.DAR.org.