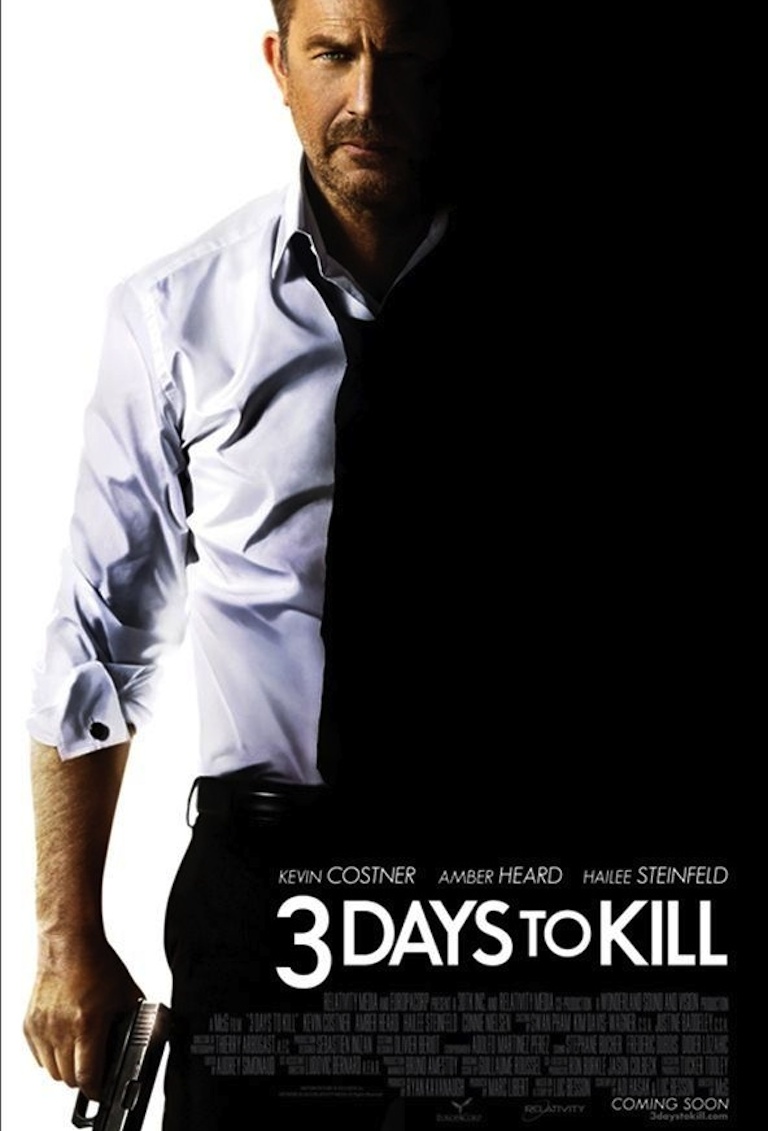 “3 Days to Kill” is the kind of movie they usually dump on us in mid February. I think it’s also how much time Luc Besson (“The Transporter”) had when they asked him to write the script.

Ethan Renner (Kevin Costner from “Man of Steel“) has been a CIA agent for 25 years, but now he is dying from some kind of “brain cloud.” He decides it’s time to return to Paris and make amends with his estranged wife and 17-year old daughter Zoey (Hailee Steinfeld from “Ender’s Game“).

Just imagine the gasp in the theater when we find out the CIA has asked him to do just ONE MORE JOB. Like we’ve never seen this before.

For some reason, his wife leaves him with Zoey for three days so they can catch up and bond in between murders. I actually thought this felt like some John Hughes kind of thing, complete with an “Uncle Buck” my-teenager-is-missing moment. I don’t want to say this movie is derivative, and you will think I am kidding, but there was a slow motion bit with Costner carrying her out of danger a la “The Bodyguard.” At that moment I stood up with my lighter and screamed, “Whitney gone y’all.”

Leading our dying hero back into the fray is the blonde bombshell Vivi (Amber Heard from “Paranoia”) who is “top shelf” (what she calls herself) and throws herself at him like a drunken prom queen. This whole movie seemed like a spoof of the genre with names like, “The Albino,” The Accountant,” and “The Wolf.” At least Costner did not say he was “getting too old for this,” though at 59 somebody needs to tell him that.

Now, I really like Costner, but in this movie he had to keep his heart rate low. I think they made it part of the plot because it matches his acting style. Everything he did seemed to annoy him, whether it was a family dinner or shooting three guys on the street.

The movie is meant to be a plot-driven thriller played against sentimental family moments. These two elements did not mix well here, and the result just seemed tired and hack. This kind of thing has been done well in “The Long Kiss Goodnight,” and Luc Besson actually did it in “Leon: The Professional.” In this movie, everything just fell into place way too perfectly, and when that happens it is not thrilling.

I can only give this movie 1 star out of 5, and that is because of Costner’s badass biker scene. The rest of it should only be seen on cable at 3 a.m.