Prince William, Virginia – Last week, the Prince William Chamber of Commerce held its annual Education Summit, where it recognizes the winners of its scholarship program and takes a look at educational issues. This year the focus was on the importance of early childhood education. 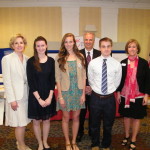 Kendra Kielbasa, director of Smart Beginnings Greater Prince William, the main event sponsor led with some striking statistics. She said that one in five children being born in Prince William will reach kindergarten unprepared to learn. From there, they will be plagued by an ever-widening achievement gap. “They are four times more likely to drop out of high school, eight times more likely to get arrested and have a higher use of public assistance,” said Kielbasa.

MTCI President Dalena Kanouse, a member of the Board of Directors for Smart Beginnings, made the business case for investing in early childhood education. She said that between 2010 and 2020, 600,000 job openings will be created. Of these, 40 percent will be new jobs, and 40 percent of those will require a minimum of a four-year college degree.  She said that we must take steps now to develop a skilled, productive workforce. “The workforce development pipeline begins at birth,” said Kanouse, “This is an investment in our community and our future.”

In his remarks, Dr. Mark Ginsberg, Dean of George Mason University’s College of Education and Human Development emphasized the importance of quality, affordable access to early childhood education for all children. He said that business leaders and educators must work together to identify and develop skills needed for the 21st century workforce, such as collaboration, critical thinking and creativity.

“If we take action, we can assure the success of our collective future,” said Dr. Ginsberg. 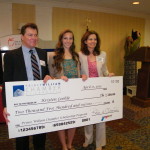 These graduating high school seniors were selected based on their demonstrated academic excellence, community involvement and solid career goals. Each student will receive $2,500 towards their continued education. To be eligible, applicants must be employees, or dependents of employees, of the Prince William Chamber’s member businesses.

After recognizing the scholarship winners, Chamber President & CEO Rob Clapper announced that the Chamber has entered a partnership with Internships.com. “We will now be able to connect students with internship opportunities offered by our member businesses,” said Clapper. “In this way, we can help to strengthen career skills and prepare area students for success in the workforce.” He said that the service should be available on the Chamber website—pwchamber.org—in May 2013.

Unlike many teenagers, Kristen Loehle knows exactly where she will be in 10 years—completing her pediatric residency. Her goal of becoming a pediatrician stems from a desire to help others and what she describes as “the remarkable effect children’s optimism” has had on her own outlook on life and its difficulties.

Her volunteerism has both nurtured and reflects her love of children. At Transitional Housing BARN, a local women’s shelter, she provides child care while the mothers work or attend career training. She also is a volunteer coach for her community swim team, and has lent her services to other charitable activities.

As a varsity runner on Battlefield’s cross country and track teams and JV basketball player, Kristen says she learned the importance of tenacity and teamwork. She is also a member of several honor societies, was selected to attend the Governor’s School for the Humanities and is ranked number 10 in her class. Kristen says that the Prince William Chamber Scholarship will help her to, “Contribute to the health of the future generations in this area by encouraging kids to demonstrate good nutrition and stay active.”

When Hayley’s mother was diagnosed with cancer, she took it upon herself to learn as much as she could about the disease and its treatment. She said she was, “Fascinated by the contradictory idea of how a toxin could save a life.” This experience combined with her many years of working with children as a volunteer fuel her dream of becoming a pediatric oncologist.

Her volunteer experience includes babysitting for teachers on teacher workdays, tutoring fellow students and helping to run volleyball clinics for younger children. She has also cleaned out 2,300 lockers at the end of the school year, donating the items she collected to ACTS (Action in the Community Through Service) and Title I schools.

Hayley learned teamwork and leadership as a volleyball and lacrosse player; she captained the volleyball team in her senior year. Additionally, she served as the president for the Center for International Studies and Languages at her school. Academic honors include being voted “Most Promising Delegate” at Model UN and being inducted into the National Honor Society.

Hayley credits her love of learning to her mother, who read to her on a daily basis as a young girl. She says that the Prince William Chamber Scholarship, “Places me one step closer to my dreams…of aiding the youth of my community.” Hayley’s “Chamber Connection” is her mother Lisa Racine, who works for Prince William County Schools.

Last summer, Jason had the opportunity to study genetics at the Virginia Governor’s School for Science, Math and Technology. His exposure to genetics, biotechnology, and the underlying mechanisms of the human body inspired his desire to attend medical school and pursue a career in research.  He plans to begin his college studies in biomedical or chemical engineering, building a solid foundation for medical school.

Jason actively gives back to the community through church and Key Club activities including teaching Vacation Bible School, feeding the needy and collecting items for toy and clothing drives. He also volunteers to support the sport that he loves, participating in fundraising efforts for his recreational league lacrosse team, which he captains.

Through his community involvement, he has been able to make a difference in the lives of children. Through his love of lacrosse, he has been able to learn the value of teamwork and leadership as the captain. As a musician, he has found the value of hard work and dedication to excellence. Jason has earned several awards and has been recognized throughout his high school career as an excellent student. He is ranked 3rd in his class at Potomac High School. Jason’s mom, Patricia, credits reading to Jason everyday to increase his vocabulary and sparking his interest in learning with visits to museums and historical places as the most influential factors in his academic success. Jason’s “Chamber Connection” for this scholarship is his Mom, Patricia Ksanznak from Prince William County Schools.

“We have long supported academic success and giving back to the community through our scholarship program.  With this change to our scholarship program we have been better able to reward the members of our local business community for all that they do to enhance the economy and quality of life in the Prince William region,” said Rob Clapper, President & CEO of the Chamber.

Minnieland Academy is the Chamber’s 2013 Education Vision Partner. Scholarship funds were raised through the generosity of Chamber members such as Lockheed Martin and during the Chamber’s Frostbite Golf Scramble.  For more information on the Community Outreach efforts of the Prince William Chamber of Commerce, visit www.PWchamber.org.