Proud of its humble beginnings, OWL VFD has grown to be one of the busiest Volunteer Fire and Rescue Departments in the Country.

In September 1938, the Occoquan-Woodbridge-Lorton Volunteer Fire Department was officially incorporated. It was 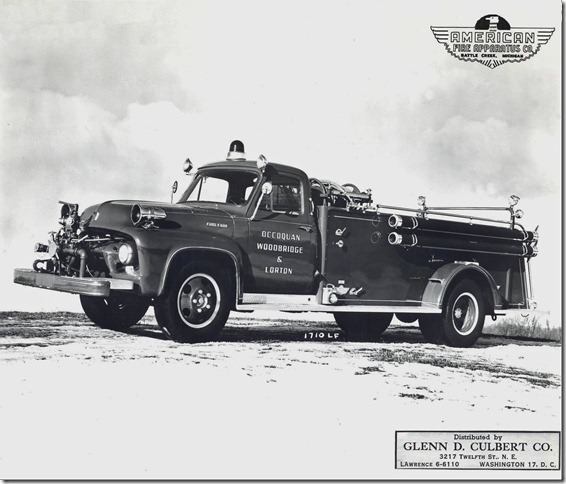 two years of hard work for a group of concerned citizens who recognized the need for a Fire Department in the area. Many of them put up personal property and their own money to secure loans to build a building to house the apparatus and start the department. Sometimes they had to “pass the hat” to pay electric and other bills monthly.

Before OWL VFD the closest Fire Departments were in Alexandria, Manassas and Fredericksburg.  The first OWL VFD station was in the Town of Occoquan on the corner of Washington and Mill Street, Station 2 in PWC. From there they built a building that is now the VFW in Occoquan. In 1958 they opened a second Station on Route 1, Station 12 (later relocated to Montgomery Avenue.) From there, OWL moved from the Town of Occoquan to the current Station 2 on F Street, and opened up Lake Ridge Station 14.

OWL VFD’s continued success is because of the foresight and hard work of those who built the foundation and the dedication and commitment of our members who serve today.  “Even from our humble beginnings, OWL VFD has historically strategically planned for disaster events, keeping up on the latest training, equipment and education available.” said President Hehr. “OWL VFD invests thousands of hours in professional training and certification courses. Our care and dedication to Fire and Rescue is reflected in our efforts of staying up to date and ready for the task.”

“OWL has a rich history tradition of creating a family atmosphere while mentoring our members into a variety of professional services” said Chief McAllister. “We honor the past by preparing for the future. We are always looking for new members, both experienced in fire and rescue, and those who are coachable and have a passion to serve their community.”

OWL VFD is one of the largest and busiest volunteer fire and rescue departments in the United States. OWL VFD provides fire suppression, EMS care, and rescue services to 80,000 residents in our 27 square mile area. OWL volunteer Firefighters and EMTs work the 6 pm to 6 am shift, five days a week, plus 24 hours on holidays and weekends.

For more information on OWL VFD, visit www.owlvfd.org  or become a fan on Facebook at www.facebook.com/owlvfd