What started as a flower garden along a narrow piece of land on Route 15 in Haymarket has evolved
into 150-acre destination in Nokesville for families, photographers and flower lovers.

“We bought the Haymarket farm in 1995 to grow flowers for my mom’s florist in Mclean,” said Michael Dawley, farmer and owner of Burnside Farms. “We also grew wholesale flowers and plants for Whole Foods and local florists.”

But, he said, as the field filled with blooms, he noticed people stopping along the road to take pictures in the field.

“I thought, maybe it would be neat to open the fields to the public,” he said. “In 2012 we bought too many flower bulbs, and I thought we should just plant them in the field for a pick-your-own flower event. It was an overwhelming success!”

A Festival of Flowers

That one planting season evolved into the Festival of Spring, where they plant more than eight acres of spring flowers — more than a million tulips and daffodils — for a spectacular pick-yourown event.

“We outgrew our Haymarket farm in 2014 and have signed short-term leases with several landowners for the past four years, the most recent being a one-year lease on Haymarket Drive that ended because the property was sold to developers,” said Dawley. “We currently host our flower festivals on Kettle Run Drive on the edge of Bristow in Nokesville.”

Dawley said they lease 77 acres and plant about eight acres of spring flowers and about 22 acres of summer flowers. He starts planning the season about a year ahead, rotating fields every three years to ensure proper field health. Regardless of location, the explosion of blooms draws visitors from near and far.

“Tulips are the most popular,” said Dawley. “Our tulip season is entirely dependent on the late winter/early spring weather patterns. Our five-year average is mid/April for about three weeks. A cold spring will extend our season and a warm spring will shorten it.”

The best way to plan a trip is to monitor the Facebook page, where they post daily updates. Tickets can be pre-purchased online or at the gate. Unlimited re-entry passports are also available and recommended for anyone who plans to visit more than once. Children under 2 are free.

Unlike some gardens that are merely a sight to see, Burnside flowers are for sale. Prices fluctuate throughout the season, and options include daffodils, tulips and bulbs.

Kids won’t be bored. In addition to the flowers, there are also bounce houses, a playhouse, cornhole games, a short-film cinema in the barn, corn sandbox, more than 100 pairs of authentic Dutch wooden shoes to try on and a picnic area.

More Than a Moment in the Sun 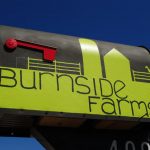 “After the success of our 2012 tulip season, we decided to add pick-your-own sunflowers for our 2013 summer season since we were already growing wholesale sunflowers,” he said. “Our sunflower season was also very successful and runs for about six weeks starting around mid-July.”

“I had been planning the trip for about four months, so I did a lot of research and to make sure the trip was well worth it,” she said, noting that she and her girlfriend visited on Aug. 17, 2019. “I was honestly surprised at the size of the actual farm and impressed that you were able to cut your own sunflowers to take home for a small fee,” she said. “Based on the hospitality, along with the sunflower umbrellas that they lend to you alone, I would 100% recommend that anyone looking to visit a sunflower farm visit Burnside first.”

Dawley said he tries to make sure every visitor walks away with that type of positive review.

For up-to-date information about Burnside’s hours and offerings, visit BurnsideFarms.com. The flower fields are located at the Nokesville Farm at 11008 Kettle Run Road.

Marianne E. Weaver ([email protected]) is a freelance editor and writer. She earned a BA from the University of Pittsburgh and an MJ from Temple University.