Success never comes easy, but it certainly is not new for the robotics team at Osbourn High School. Members of “Team 1895” (or “Lambda Corps”) have been designing and building robots since 2005, and ever since then they have earned several awards and recognitions for their efforts.

The number 1895 was assigned to the team when it registered for the FIRST Robotics Competition, and the name Lambda Corps was influenced by an original student member’s enthusiasm for the game “Half-Life,” which uses the Lambda symbol.

In addition to a strong network of alumni and mentors qualified in their fields, the team has about 35 students per year, each committed to learning and developing pertinent skills through collaboration. Membership is open to all OHS students, giving individuals of every level of experience the opportunity to contribute and benefit from the team. 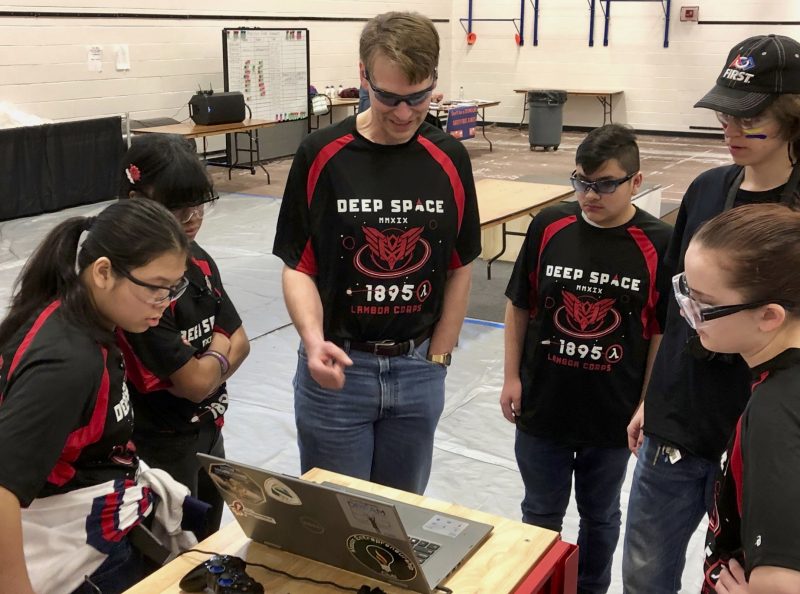 “The most gratifying thing to see as a mentor are the students,” said Lead Mentor John Ortega, who has been involved with Team 1895 for 12 years. “Many students feel intimidated when they first step into the ‘Maker Space,’ but by the time they become senior members, there is a huge growth in self-confidence.”

The Maker Space is the innovation lab that provides modern tools and plenty of space for students to fabricate, code and test the robot.

“We see the shyest kids speaking up with their own ideas, and because we are a student-driven team, students actually teach other students.” Ortega said.

The strong connection between team members becomes crucial in the team’s main activity of the year, participating in the FIRST Robotics Competition (FRC). In this distinguished competition, teams of high schoolers are challenged to make a robot that meets certain standards and performs a specific task. They compete in district, regional and even world competitions until a victor is determined.

“After the concept is released in early January, the students spend the next six weeks designing the robot, fabricating the frame, assembling and wiring the control system and sensors and writing code in Java,” said David Frederick, technology teacher at Osbourn and 13-year mentor for Team 1895.

“Our students often prefer working in a specific field, mainly electrical, mechanical or programming, but a lot of times they overlap.” Frederick added that “aside from regular meetings year-round, during this six-week build period we meet three nights a week and all day Saturday. In local competitions, we compete against schools in Virginia, Maryland and the D.C. area.”

For this year’s “Destination: Deep Space” theme, Team 1895 was tasked with creating a robot capable of carrying hatch panels and cargo then attaching and loading them onto a rocket and cargo ship. An added trial was that for part of the challenge, human driver vision was blocked and robots had to operate using either autonomous code or a vision system directly installed on the robot. 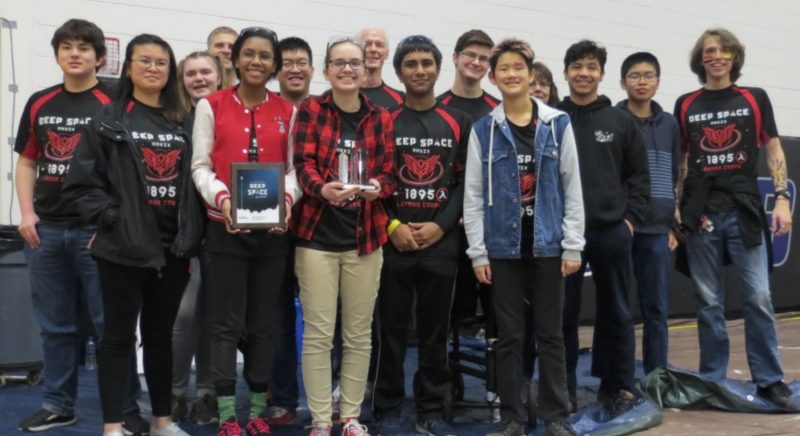 According to Frederick, attaching hatch panels to the cargo ship using autonomous code was the team’s greatest difficulty, however, with the support of mentor Scott Pugmire, the team clearly overcame this problem as was proved by the “Autonomous Award” it received from Ford Motor Company. This award recognizing the team’s high-performance autonomous robot operation followed just one year after the team’s “Excellence in Engineering” award for the use of AutoCAD (a computer-aided drafting software program) and innovative robot design.

The Impact of Robotics

The positive results of participating on the team speak for themselves. Many students on the OHS robotics team have been hired by companies like Lockheed Martin and have attended schools such as Virginia Tech, UVA, MIT, Carnegie Mellon, Penn State and many more. However, all this is not solely the result of technical skills acquired from being a part of Team 1895.

The team focuses on building strengths for real-life situations, both in expertise and character. It is the combination of knowledge gained from true professionals like mentor Dan Bray and skills acquired through perseverance and teamwork that make membership in Team 1895 worthwhile.

As Ortega also noted, “The students build maturity, confidence, teamwork and time management skills,” which are strengths that prove useful in all situations and career paths. In fact, although many students in Team 1895 pursue engineering and technology-centered careers, several others become doctors, businessmen/women and the like. Team 1895 members can also join the business, marketing and spirit “teams” to help fund and promote their robotics team.

For the Osbourn High School robotics team, a unified love for robotics is only the beginning of a large journey toward all-around growth.

A high school senior and lifelong resident of the Manassas-Prince William area, Gwynn Major enjoys writing and editing for her school and community publications.