The holidays bring out the “railfan” in many people, making our area a destination for those drawn to all things train related.  Prince William is an active rail community: Amtrak and Virginia Railway Express (VRE) passengers move through the region daily, as do CSX and Norfolk Southern freight. Local clubs and museums also keep rail history alive. Meanwhile, Santa arrives by train each December for the tree lighting in Manassas, and tickets generally sell out for the popular VRE Operation Lifesaver Santa Trains on Dec. 8. 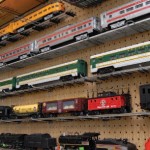 A selection of model trains for sale at KMA Junction.

The Prince William Model Railroad Club opens its permanent HO scale model railroad layout at the Historic Quantico Depot to visitors on Saturdays, Dec. 1, 8, 15 and 22 from 10 a.m. to 4 p.m.  The exhibit is also open Sunday, Dec. 2 during the Quantico Christmas Parade, noon to 3 p.m. In the standard HO scale, 1 inch equals 87 inches in real life.

On March 9 and 10, 2013, the club, along with Northern Virginia NTrak members, will help Dale City Boy Scout Troop 964 bring their model train show to Saunders Middle School. The NTrak members counsel Scouts in “Railroading Merit Badge” workshops, and scoutmaster Jeremy Wood said the $7 admission ($3 for students and seniors) goes to a good cause. Last year the troop raised more than $6,000 to help Japanese Scouts from Ishinomaki rebuild after the 2011 tsunami. The show features 110 modules, a Lego layout and the Scout’s Club Car restaurant.

At the Center for the Arts on Battle Street in Manassas, the National Capital Trackers and Northern Virginia NTrak operate the Winter Wonderland Train Show, co-sponsored by Recreation Manassas. The show runs Dec. 12-16, 5 to 8 p.m. weekdays, Saturday 10 a.m. to 4 p.m. and Sunday 10 a.m. to 3 p.m. Santa visits Friday and Saturday. Visitors are asked to donate a new toy or non-perishable food item to SERVE, a local shelter and food distribution center.

Looking for a place to start your own train layout? See Steve and Fran Fortes at Prince William’s only shop for model train supplies and services, KMA Junction, in the Cavalry Village Shopping Center on Center Street in Manassas. e couple stocks starter sets for the holiday surge: everything from battery-powered Lionel train sets for ages 2-1/2 and up, to high-tech Digitrax-powered trains for the baby boomer turned robber baron.

Manassas Junction was the site of both the First and Second Battles of Manassas during the Civil War and of the nation’s ﬁrst military railroad. Start your tour at the Manassas Railroad Depot, which displays artifacts and photographs. Across Prince William Street at the Manassas Museum, see more exhibits and shop for railfan gifts such as train ornaments, hats, P. Buckley Moss prints, holiday cards and books like Clark Spitler’s “Manassas Gap Railroad, Independent Line.” The book illustrates the unﬁnished Gainesville-to-Alexandria rail line and oﬀers GPS waypoints for railfans to hunt surviving sections.

On June 1, 2013, the Manassas Heritage Railway Festival will celebrate its 19th year with a family-friendly event that always draws a big crowd. Visitors can see model railroad displays at the Harris Pavilion and enjoy fun rides for children of all ages. 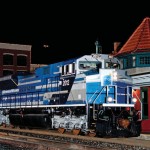 The ﬁrst local commuter, so it is said, hitched a ride on a milk train in the 1920s. These days, VRE carries more than 20,000 riders a day, and Prince William area residents make up the largest portion of those riders, served by six stations: Broad Run/Airport, Manassas and Manassas Park on the Manassas Line, and Quantico, Rippon and Woodbridge on the Fredericksburg Line.

“There’s usually a surge after the winter holiday,” said Manassas resident Sara Murphy, who has been riding the 6:47 a.m. train to L’Enfant Plaza for nearly 12 years. Murphy works at the Smithsonian’s National Museum of American History–the same museum that houses Southern Railway 1401, one of the steam locomotives that pulled President Franklin D. Roosevelt’s funeral train from Warm Springs, Georgia to Washington, D.C. in 1945. Along that same route, Murphy today naps, reads and forges train friends. ”One day, I left my ticket on the train,” she said. “Because I kept a business card with it, VRE emailed me: ‘We have your ticket. What train will you be on this evening so we can get it back to you?’ Now that’s service.”

Above: A detail view of the diorama table at KMA Junction.

Volunteers with a passion for rail safety are always welcome at Operation Lifesaver. While they are most visible at the railway festival, passing out paper engineer hats and safety information, or greeting riders on the VRE Santa Train, check the national website, www.oli.org, and you’ll see the mission is much broader. State coordinator Melvin C. Jones recently presented a certiﬁed “Grade Crossing Collision Investigation” course to 35 police oﬃcers and state troopers at the Manassas Park police station. His volunteers deliver rail safety presentations to truck drivers, school bus drivers and driver education classes.

“Southwest Virginia, Hampton Roads and Northern Virginia rank in the top ﬁve areas of the state for rail-related collisions, injuries and deaths,” said Jones. “The common cause is generally due to motorist failure to obey the warning signs and trespassing by pedestrians….They don’t have a clue as to how fast trains really move, or that trains can’t stop quickly. Trespassers…tune the train out. Today’s trains are quieter and faster. I tell them, stay oﬀ rail property and stay alive.”

Dan and Dick Peacock are rail advocates. Dick writes a “Train Talk” column in the News & Messenger, attends VRE board meetings and worked to secure four Amtrak signs for the Manassas station. His brother Dan commutes on VRE to the U.S. Environmental Protection Agency, creates videos that promote regional train service and often makes sure the Manassas station waiting room is stocked with up-to-date train schedules.

“Our main interest is to encourage people to use trains to take more visits to Manassas,” said Dan. Their latest project: working with the National Park Service, bus and train oﬃcials to connect and promote the last leg of a Manassas train-to-bus-to-battleﬁeld tourist loop.

Enjoy Dan’s train videos at www.YouTube.com/user/TrainManDan100, and think about how you can take a more active role in the thriving rail community around you.

Cindy Brookshire’s humorous short story is one of more than 25 entries by local writers in New Departures, a Write by the Rails book anthology featuring Chip Deyerle, Katherine Gotthardt and Dan Verner. For information, visit www.writebytherails.blogspot.com.