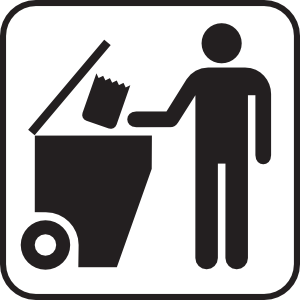 Americans typically threw away an estimated 254 million tons of trash every single day of the year in 2013, which is up four million tons from 2010 estimates. What people do not understand is that when something is thrown in the garbage can, it does not magically disappear. Trash has to go someplace. This usually means landfills or incineration. While these two waste disposal options are the most popular, they are not without their own set of problems.

Is America’s Throwaway Society Throwing Out the Future? The amount of waste that is needlessly and thoughtlessly generated is staggering. Our garbage collectors at American Disposal Services see it on a daily basis. For example:

Cutting Back on Waste: It is everyone’s responsibility to cut back on waste as much as possible. It’s easier than most people think. Small changes implemented by everyone, will add up to a better future for all of earth’s inhabitants.

This is perhaps the biggest and most necessary change we should focus on. Plastic does not degrade, not now, not ever! Start by refusing plastic bags. Bring your own shopping bags to the grocery store. Carry a travel mug for coffee refills, stainless steel containers for water, and consume more fresh produce for snacks, rather than individual servings sold in plastic containers. Avoid plastic utensils and straws. Ask that your dry cleaning and newspapers be free from plastic coverings. Buy toys made from natural materials, such as wood, whenever possible.

2. Choose Reusable Not Single Use

This would include items such as washable, cloth diapers, glass containers for food products, handkerchiefs instead of tissue, rags or cloth towels instead of paper towels.

Your grandparents or great-grandparents were experts at finding new uses for old items, such as using worn out bathtubs in the garden for flowers or as a water feature, turning old tires into planters or chairs, and making aprons out of old shirts.

Garbage collectors hate the fall season most of all because people throw out tons of green waste that could be turned into healthy compost for the garden. A quick internet search will give you hundreds of ideas on how to make or buy a container that fits your living space.

We at American Disposal Services are proud to keep as much waste as possible from needlessly going into landfills by working together with The American Recycling Center to remove items from household garbage that can be recycled.