Lots of televisions, some huge, are the second thing patrons notice when they enter any of the three The  All American Steakhouse & Sports Theater restaurants, located in Woodbridge, Manassas and Ashburn. Near the front entrance is a glass display case with hand-cut beef. The case is located next to a window into the kitchen where cooks can be seen working. It’s the beef and TVs, however, that draw attention. 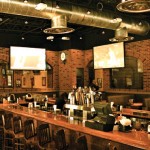 High-definition projection screen televisions, each six-by-eight feet, surround the bar at all the restaurants of The All American Steakhouse. Along with hand-cut steaks cooked on mesquite wood, the franchise’s menu includes a rich variety of dishes and fun creations

At least eight high-deﬁnition projection-screen televisions, each six-by-eight feet or 100 inches diagonal, are mounted high on every steakhouse’s barroom walls. The TVs surround each eatery’s bar in the center of the room, which also includes several dining booths. Additionally, 10 televisions in total are mounted high on every wall of each restaurant’s larger, separate dining room, where the bar’s TVs are also visible through large arched windows in the wall separating the rooms.

“Any major sporting events are all on daily,” said owner George Jones, who oversees the franchise, along with co-owner Brock Anderson. Former Washington Redskin Marvcus Patton is also an owner. Mike Weckstein is managing partner of the chain’s Manassas steakhouse, Jones reported.

Sports entertainment aside, it’s the food that really attracts people, Jones said. “The biggest thing that separates us from all the other casual dining steakhouses … is that we have an in-house butcher [who]cuts all our steaks,” he said. “We also age our beef.” While most restaurants age their beef up to 21 days, The All American Steakhouse ages theirs no less than 35 days. Aging is what gives steaks ﬂavor and tenderness, he explained.

“Typically a steak at our restaurants [has aged]anywhere from 40 to 50 days when it hits the table. Most restaurants usually don’t age beef as long because it’s expensive,” Jones explained. “Because we have an in-house butcher we’re able to save money cutting our own steaks, and, therefore, we can also aﬀord to age the meat [longer].”

Having a butcher at each restaurant results in better cuts, he added. “Their job is to cut all the steaks to our speciﬁcations, which also gives us a lot more control, versus some butcher shop out in  Kansas cutting your steaks for you,” he said. “We also cook them on mesquite wood.”

While the ﬂoor plan, concept and design are essentially the same in both Prince William-area restaurants, there are a few diﬀerences. Unlike the Woodbridge eatery, which opened in 2006 at  Merchants Plaza in Lake Ridge, the new Manassas restaurant is in a building by itself in a growing development at the intersection of Route 234 and Spriggs Road. “There are really no restaurants down there,” Jones said. “There was deﬁnitely a need for a restaurant.”

Another diﬀerence is that smoking is permitted after 9 p.m. in the enclosed barroom of the Woodbridge location, staﬀ said. The Manassas eatery is completely nonsmoking at all times. The Woodbridge restaurant also sometimes has musical entertainment and karaoke after 10 p.m. “We don’t do any of that in Manassas, [because that restaurant is]right smack in a neighborhood,” said Jones. For this reason, the Manassas eatery also closes earlier than the Woodbridge steakhouse.

Additionally, a patio will be completed in early spring at the Manassas steakhouse, he said. “We’ll open it up … when the weather’s nice.”

In addition, mothers eat free on Mother’s Day. “We’ve been doing that for seven years,” he said.

Since opening in December 2012, the Manassas steakhouse consistently draws a large weekend crowd. “Always call ahead Fridays and Saturdays unless you like to wait,” laughed waitress Quila Ross. Waits those nights can be as long as two and a half hours, but patrons can call ahead to gauge how long the wait is or make same-day reservations, staﬀ said. Reservations are not usually taken much more in advance than that.

Dining at the restaurant mid-afternoon one Sunday, Matthew and Brenda Cogdell avoided the crowds. The couple lives about a ﬁve- minute drive from the eatery. “It’s good to have a restaurant in the area,” she said.

“We come for the bread and the burgers. The rolls are delicious,” said Bonnie Gomez of Lake Ridge, who dined at the Woodbridge steakhouse one afternoon with her family. They’ve eaten there several times, she said. “The menu has a good variety of items, and it’s all very tasty,” added her husband Jessie Gomez.

Visit  www.TheAllAmericanSteakhouse.com  for  more  information about each restaurant.

Manassas Park resident Val Wallace is a freelance writer, editor and proofreader and a new contributor to Prince William Living magazine. She can be emailed at vwallace@princewilliamliving.com.