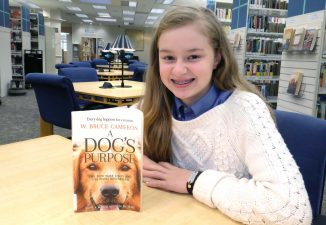 When Suzahn Vollstad was seven years old, her younger brother, Paul, had a series of strokes that left him hospitalized for five months with mitochondrial disease, a disorder that affects most of the cells in the body and prevents them from creating energy to sustain life and support organ function.

Suzahn’s mother, Peggy Vollstad, said Suzahn witnessed her brother seizing several times. The episodes had an impact on Suzahn, but the family didn’t realize how much of an impact until years later when Suzahn read “A Dog’s Purpose: A Novel for Humans” by W. Bruce Cameron. The book is about a dog that lives many lives and shows how he uses each of those lives to help teach his humans that everyone is born with a purpose.

Suzahn’s essay on the book recently won the First Place Grand Prize for A Book That Shaped Me, a summer writing contest sponsored by the Library of Congress. The Prince William Public Library System promotes, markets facilitates the contest in the libraries, and adopts the contest annually as part of its regular programming.

Suzahn, who resides with her family locally and is now 11, said one night at the hospital stands out. “I call it the Monday night. It was a really bad night. There was a couch and I hid under a pillow because I kept hearing my mom calling for someone to come in because he just kept on seizing. It was just so scary. It was a really hard time.”

Vollstad said she and Suzahn’s father tried to talk to their daughter about how she was faring after her brother’s hospitalization, but Suzahn remained silent on the subject. “It wasn’t until this book that she finally was putting it out there and talking about it,” Vollstad said. “This book just totally spoke to her.'”

“It was just such a great book. It made me see the purpose of my life and my brother’s life. For my brother, I realized that even though so much has happened to you, you can still be a normal child. For me, you just have to love your siblings so much that you’d do anything for them,” said Suzahn.