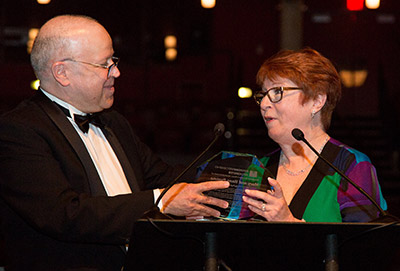 The Hylton Center hosted its seventh Anniversary Gala on April 1st, where over 370 guests enjoyed an elegant dinner on the Merchant Hall stage while being serenaded by a small ensemble from the Youth Orchestras of Prince William. This year’s Gala program honored Mary and Hans Postma for their dedicated support of the arts, as well as featured a spirited live auction for two vacation packages with an auctioneer leading guests to “Raise Your Paddle” to raise funds for the Hylton’s Veterans and the Arts Initiative, which raised over $22,000. After the auction, guests joined an After Party, sponsored by KO Distilling, which included craft cocktails, sweet and savory bites, music and dancing with local band Keynote, a live DJ, a photo station, a Giving Wall, and prizes.