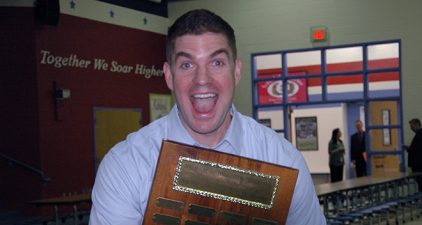 Andy Jacks, the principal at Ashland Elementary, is everywhere and on top of everything that happens at his school. But this morning, he was kept from his usual rounds by a “meeting” with R. Todd Erickson, Associate Superintendent for Central Elementary Schools. The meeting was interrupted when Jacks was summoned to the cafeteria for a “problem that required an administrator.” Jacks was stunned when he saw Jim Baldwin, executive director of the Virginia Association for Elementary School Principals, who was there to present him with the National Distinguished Principal Award for Virginia. The cafeteria was filled with students and teachers who had been sitting quietly for a “surprise.” They erupted into cheers and applause as confetti flew in the air.

“Mr. Jacks is an outstanding principal and this award is well deserved,” said Superintendent of Schools Dr. Steve Walts, who recounted meeting Jacks 13 years ago and seeing his enthusiasm and potential for becoming a school leader.

“What makes Mr. Jacks special is the relationship he forms with all of his stakeholders, teachers, and community,” said Baldwin, quoting from a nomination letter. “But, the most important relationships he forms are those with children. What I have always admired about Mr. Jacks is that he has always been student centered and ensured that his students are out front and owning their school and their educational outcomes. Mr. Jacks ensures that every kid has a special relationship and feels valued,” stated Baldwin.

Jacks was surrounded by his family, friends, students, school administrators, and Dr. Walts when he received his award. Even more special was the presence of Jacks’s close friend and fellow principal, Hamish Brewer, who won this award last year.

This second consecutive National Distinguished Principal Award is a definite mark of the high caliber of educators in PWCS and the amazing dedication they have for their students.