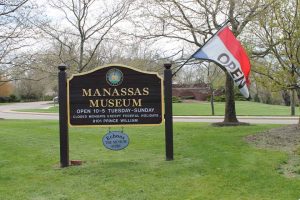 The Manassas Museum features not only history, but great experiential learning with seminars, talks, tours and more.

Be a part of a national effort to preserve and maintain battlefields and historic sites. A tour of Liberia is included for all volunteers.

Museum at the Market; April 7 – October 27; 9:00 a. m. – 1:00 p. m.; free
Back for another season, Museum at the Market offers free hands-on fun for all ages. Visit the museum tent at the Saturday Market in the Prince William lot across from Baldwin Elementary School.

Stories of Preservation and Progress Speaker Series: The World Around Us; April 11; 3:00 p. m.; Free at the Manassas Museum.

New Exhibit: Expanding Boundaries; April 13-September 16; free
Learn about the impact the Manassas Boys and Girls Club has on our community and the children it serves. Through its focus on academic success, good character and citizenship, and promoting healthy lifestyles, the Club fulfills its mission to help boys and girls of all backgrounds, especially those who need them most, acquire the skills needed to become productive, civic-minded, responsible adults.

Guest Curator Michael Gaines examines the life of wealthy Alexandria brewer and part-time Manassas resident Robert Portner and the impact he had on the City of Manassas.

Join neighbors and friends for a community picnic to help plan playground upgrades and other improvements.  Hot dogs will be served. Rain date is April 21.

Join former Washington Post reporter and New York Times best-selling author Liza Mundy to learn the true tale of the young American women who helped shorten World War II and who saved thousands of lives by breaking the codes of the German and Japanese armed forces.

Join author Rebecca Boggs Roberts to learn about the heroic struggle of Alice Paul and the National Woman’s Party as they worked to earn the vote, and the grand Pennsylvania Avenue parade planned for the day before Woodrow Wilson’s inauguration.