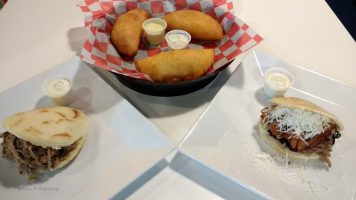 Empanadas are one of the most popular items at Arepas Bee

It’s only been around for about a year, but Arepas Bee is quickly becoming a hot spot to visit for new and unique flavors. Arepas Bee serves Venezuela’s famous Empanadas and Arepas, making it stand out since there aren’t many places in the Prince William region that offer Venezuelan food.

Located inside the Beehive indoor playground at a shopping center in Woodbridge, Arepas Bee may not stand out from the outside of the building, but the food sure does. While the location may seem strange, it actually works quite well, as families come to play at the Beehive, work up an appetite and then have a place right there to eat a delicious lunch or dinner that beats fast food any day.

Venezuelan Culinary Delights
General Managers A.J. Martinez and Maria Gomez operate the restaurant. Martinez said, “There aren’t many Venezuelan restaurants in this entire region, so when the Beehive playground offered us the opportunity to share our food and take over their kitchen in 2016, we jumped on it.”

Inside, you’ll find a casual, clean, modern eating area with plenty of tables and chairs, an open kitchen so you can watch the magic happen, and a counter to order food. The menu at the counter offers some expected kid-friendly food for the Beehive kids like hot dogs, chicken tenders, and mac and cheese, but people usually come for the amazing arepas and empanadas.

The empanadas are the most popular item, according to Martinez, with all three varieties—chicken, beef and cheese—being highly sought after. Empanadas are made with a cornmeal-based dough, often called harina pan, which has some sugar added to sweeten it. After being filled, they are fried to a golden crisp color.

In traditional Venezuelan households, arepas and empanadas can be served as an appetizer, side dish or main dish, depending on the heartiness of the fillings. At Arepas Bee, they are worthy of a main dish due to their nice, large size and hefty fillings that are more than enough to fill you up for lunch or dinner.

The arepas are baked instead of fried but still have a nice crunch. Arepas are also a best-selling item, “especially with Central Americans in the area that have similar things in their cultures and are excited to try something new,” said Martinez.

The most popular arepa is the Pabellon, which is filled to the brim and beyond with seasoned shredded beef, beans, fried plantains, and Venezuelan cheese called queso rallado. Since it’s difficult to find any places in Northern Virginia that sell Venezuelan cheese, Arepas Bee has to venture down to Miami,
which has large Venezuelan communities, to order some of its authentic ingredients.

The food is not just authentic in its ingredients, but the three Arepas Bee staff members who help Martinez in the kitchen are all Venezuelan, so you can be sure you are truly eating authentic Venezuelan-style food. Even the drinks have been well thought out to include Parchita, a passion fruit juice; Colita, a drink similar to a cream soda; and Malta Polar, a malted soda beverage that is very common in Venezuela. 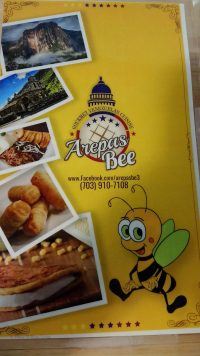 Hesitant Eaters Can Start with a Pepito
If you are hesitant about trying Venezuelan food, Martinez recommends you start with a beef or chicken pepito. The pepito sandwiches are more similar to American-style sandwiches; yet you can get a taste of the Venezuelan-style seasoned beef or chicken in the filling. “This is more in people’s comfort zones,”
said Martinez.

The best part of Arepas Bee for Martinez has been the partnering with Beehive playground and watching all the families and kids come to Arepas Bee and try new foods. “A lot of people from different cultures and backgrounds come here, and I take real pride in serving our customers and want them to come back,” said Martinez. If you don’t know what something is on the menu, ask the staff as they are happy to help new customers figure out the best items to start with based on personal preferences and tastes.

The flavor is truly unique, and unless you are Venezuelan, it’s not something you’ve had anywhere else. One customer, Delia P., said, “The food is crazy good! They must sprinkle magic in the empanadas.” Trish from Woodbridge said, “That garlic sauce was to die for. It really adds to the arepa. Put it on your arepa. It worked well with the cheese and meat one. This place rocks, and I plan to eat here again.”

Be sure to visit Arepas Bee located at 13412 Jefferson Davis Highway, Woodbridge, near the Food Lion in Station Plaza. Use the entrance to the Beehive Indoor Playground, and the restaurant is just inside the Beehive entrance. You can also call the restaurant at 703-910-7108 or visit the Facebook page
(facebook.com/arepasbee) to see the menu, reviews, photos of the delicious offerings and more.

Helena Tavares Kennedy (hkennedy@princewilliamliving.com), was born in Venezuela and grew up with Arepas and Empanadas. She can attest that Arepas Bee served up authentic Venezuelan food even better than what she remembers eating in Venezuela. Kennedy is a longtime Prince William County resident and is a freelance writer and communications consultant at htkmarketingservices.com and livinggreendaybyday.com.