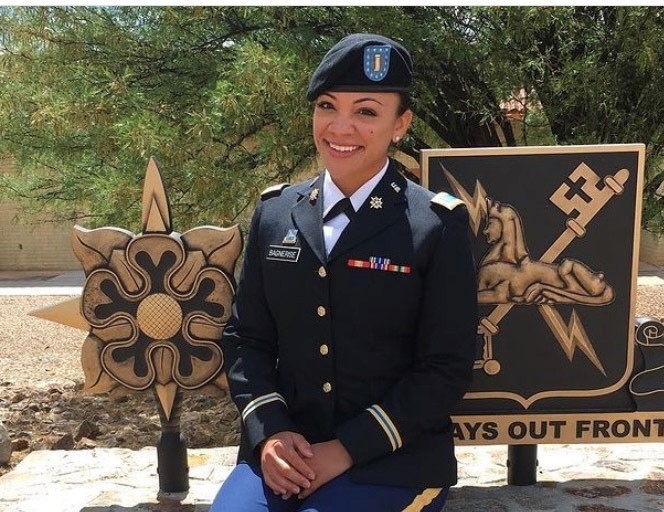 JTF-NCR is a joint service command charged with coordinating all military ceremonial support for the 59th Presidential Inauguration. As a joint command, JTF-NCR includes members from all branches of the United States armed forces operating under the auspices of Joint Force Headquarters-National Capital Region.

Bagnerise has 10 years of military service and currently serves as an assistant ceremonies officer in the JTF-NCR Ceremonies and Outreach Directorate. The directorate is responsible for planning, coordinating, and conducting official ceremonies and outreach events in the national capital region and throughout the United States.

“It is so exciting,” she said of supporting the 59th Presidential Inauguration. “It is extremely historical. I think it’s unlike any inauguration that we’ve ever seen before, just because of the events leading up to it. It is just so amazing to be part of this experience and to say that I was part of a presidential inauguration is something that I can’t compare to anything else that I’ve done.”

Bagnerise graduated from Woodbridge High School in 2011. She also graduated from George Mason University with a Bachelor of Criminology degree in 2016.

When Bagnerise was in the second grade, she was strongly influenced by the events that took place on 9/11.

Bagnerise’s paternal grandfather served 20-plus years in the Army and deployed to Vietnam. His service, combined with the events of Sept. 11, influenced her decision to start a career in the Army.

When she was 17 years old, Bagnerise decided that an early enlistment in the U.S. Army Reserve would be an excellent opportunity to serve her country and to get the money she needed for college.

“I didn’t have any money saved up for college,” she said. “Neither of my parents graduated college, and I wanted to break that cycle. It was my parents that actually recommended that the Reserve would be a good option for me so that I could get the tuition assistance to help me go to school.”

Bagnerise started her military career as a private and worked her way to specialist, but her acceptance to George Mason University eventually lead her to apply for ROTC. It was a transition she had not initially planned.

“I intended on joining only to fulfil my six years that I had signed up for,” she said. “I had no intention of staying in, but I loved the camaraderie of the Army. I love being part of the team and so I decided to commission and stay.”

After receiving her commission, Bagnerise applied for and earned a position at United States Army Intelligence and Security Command (INSCOM) where she served as aide de camp for the commander, Brig. Gen. Robert Michnowicz.

Her position allowed her to travel and visit over 18,000 soldiers, civilians and contractors at 17 major subordinate commands across the world. It also led to her new career in the civilian world. She is currently a security analyst for the same command.

“Because I work for INSCOM, and I still work for the Army, I think the best experience is being able to speak Army in my civilian job,” she said.

Outside of the Military

Outside of the military, Bagnerise participates in bodybuilding competitions all across the country.

Her passion for physical fitness dates back to her time as a ballet, tap, jazz and hip-hop dancer before the military. After joining, she found that bodybuilding helped her improve her military work on both the military and civilian side.

“I joined the military and they really focus on your push-ups and your sit-ups,” she said. “When I came home, I wasn’t dancing anymore and I found myself in the gym a lot trying to remain in shape to be ready for the PT (physical training) tests.

“While I was in the process of going to the gym and figuring out how to lift, I got myself into the bodybuilding world,” she continued. “I competed for the first time in 2014 and I won, so I was hooked from there because I’m so laser focused, and on a very regimented schedule.”

Bagnerise has traveled across the country, and the world chasing personal and professional goals, but she never forgets the people back home who have been in her corner since the very beginning of her journey.

“My family and friends were very supportive,” she said. “They sent letters while I was in basic training, and they still support me today.”