(Manassas, VA) The big finish for Arts Alive! 2013—a free, family-friendly arts festival on Saturday, April 13—will include two special events: presentation of the Kathleen K. Seefeldt Awards for Arts Excellence and a concert by the U.S. Air Force Band. The awards program and concert will begin at 8 p.m. in the Hylton Performing Arts Center, 10960 George Mason Circle, Manassas.

The awards presentation and concert will conclude Arts Alive!, a day of free performances, exhibits, hands-on activities and demonstrations by artists and arts organizations in the Greater Prince William Area. Arts Alive! 2013 is hosted by the Prince William County Arts Council and the Hylton Center. 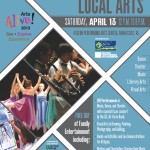