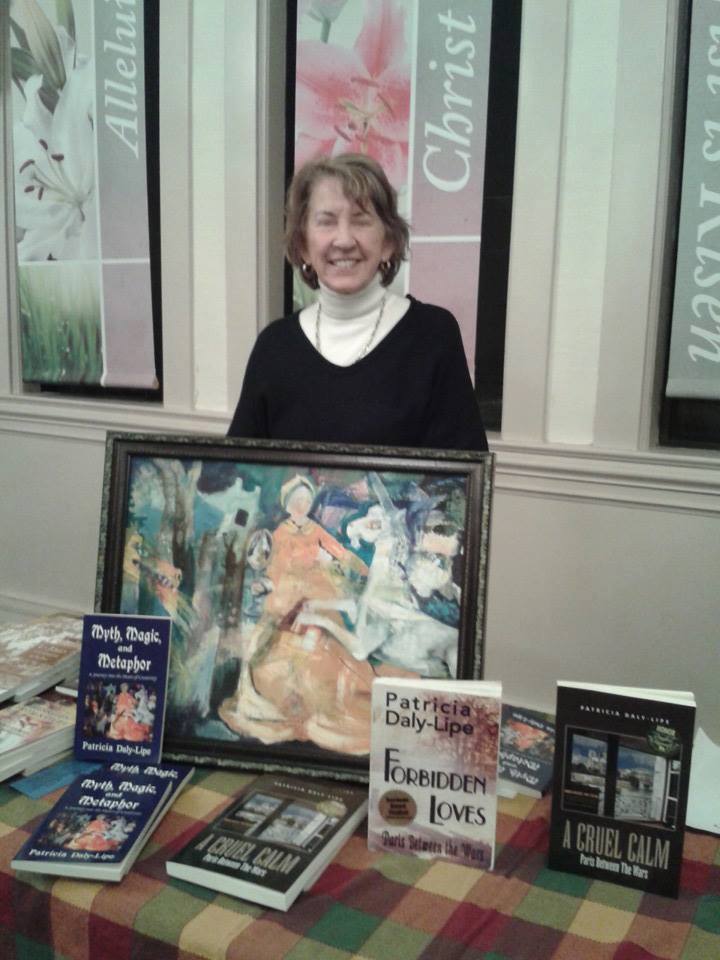 Award-winning writer Patricia Daly-Lipe spoke on “Journey into the Heart of Creativity” at the monthly meeting of Write by the Rails, the Prince William Chapter of the Virginia Writers Club on Thursday, Nov. 21 at 7 p.m. at Trinity Episcopal Church, 9325 West Street in Old Town Manassas.

Dr. Daly-Lipe won first place, nonfiction, in the 2013 Summer Shorts Writing Contest of the Virginia Writers Club for her essay of the same title. She is an author, artist and speaker from Haymarket. She has written six books:

A Cruel Calm: Paris Between The Wars, recently won first place in the historical fiction category of the 4th Annual Royal Dragonfly Book Awards. Under its earlier title, Forbidden Loves, the book won the First Runner-Up for Fiction JADA Trophy and the USABookNews.com Finalist Award.

Messages from Nature, a collection of short stories about animals, the high seas and nature. (Listen to one of the stories, Sweet William, narrated by Michael Mercurio, here.

Myth, Magic and Metaphor, A Journey into the Heart of Creativity.

ALL ALONE, Washington to Rome, A ’60s Memoir.

La Jolla, A Celebration of Its Past, winner of the San Diego Books Awards in 2002.

The sixth book, Patriot Priest, is to be published by Strategic Media Books in early 2014.

Dr. Daly-Lipe is past president of the National League of American Pen Women-La Jolla Branch, and recipient of the 2004 Woman of Achievement Award from the NLAPW-La Jolla. She was also president of the Washington, DC Branch of NLAPW, 2006-2008 and historian for the National Society Daughters of American Colonists, DC. In 2007, she spoke at the National Capital District 36 Toastmasters 2007 Spring Conference. Her presentation was titled “The Power of Words.”

She once raised and raced thoroughbred horses; now, in her “spare” time, she rescues them.

For more information about her books and upcoming speaking engagements, visit her writing website at www.Literarylady.com.

Write by the Rails, an active member of the Prince William County Arts Council, meets the third Thursday of every month at 7 p.m. at Trinity Episcopal Church, 9325 West St., Manassas. Meetings are open to the public. There are no chapter dues, but members are encouraged to join the Virginia Writers Club. First year dues are $15.

Young writers! The chapter is promoting a Teen Writing Contest for middle school and high school-aged students that has a deadline of March 1, 2014. Visit the website of The Virginia Writers Club for more information.

Information contained on this page is provided by an independent third-party content provider. Prince William Living Inc. and it’s staff make no warranties or representations in connection therewith. If you have any questions or comments about this page please contact [email protected]