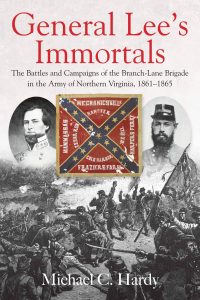 Two decades after the end of the Civil War, former Confederate officer Riddick Gatlin bewailed the lack of a history of the famous Branch-Lane Brigade, within which he had served. “Who has ever written a line to tell of the sacrifices, the suffering and the ending of these more than immortal men?” he said. “Why has the history of that brigade not been written?” With the publication of General Lee’s Immortals: The Battles and Campaigns of the Branch-Lane Brigade in the Army of Northern Virginia, 1861-1865, Gatlin’s long wait is finally over.

This storied brigade, first led by Lawrence Branch until his death at Sharpsburg, and then James H. Lane, served with Lee’s Army of Northern Virginia during its entire existence. The names emblazoned on its battle flag read like a history of that army, beginning with the Seven Days’ Battles and ending with the final roll call atAppomattox. Originally part of A.P. Hill’s famous “Light” Division, the Branch-Lane Brigade earned spectacular plaudits for its disciplined defense, hard-hitting attacks, and incredible marching abilities. Its constant position at the front, however, resulted in devastating losses, so that its roll call of casualties by the end of the war far exceeded its number of survivors.

In this deeply researched work we witness the experiences of North Carolina’s Branch-Lane Brigade in nearly every major battle fought in the east, including that infamous day at Chancellorsville when its members mistakenly shot Stonewall Jackson. Two months later they were in Pickett’s Charge at Gettysburg, and thereafter throughout the titanic battles of 1864. In the meantime we learn of the camp-life and the hard winters of Lee’s army. Yet when Lee finally surrendered at Appomattox it was the Branch-Lane Brigade still with him, no longer victors but yet unbowed.

Michael Hardy’s General Lee’s Immortals is the first comprehensive history of the Branch-Lane Brigade, and fully meets Captain Gatlin’s challenge by setting forth the complete story of these “more than immortal men.” His study is based on many years of study and grounded on a vast foundation of sources that relate every aspect of the career of this remarkable fighting command. Once finished, every reader will come to think he has met, marched with, fought beside, and bled with these North Carolinians.

Michael C. Hardy is a widely recognized expert and author on the Civil War. He is a graduate of the University of Alabama and was named North Carolina Historian of the Year in 2010. His work has appeared in national magazines, and he blogs regularly at Looking for North Carolina’s Civil War. When he is not researching and writing, Michael and his family volunteer as interpreters at several historic sites in western North Carolina and East Tennessee.