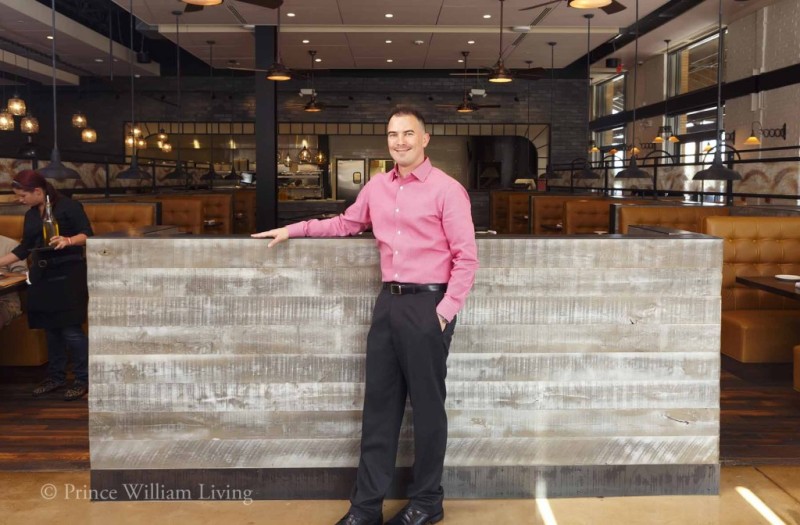 Not Your Average Joe’s (NYAJ) is the highest rated of the new restaurants that opened in Stonebridge at Potomac Town Center in recent years, and winner of a 2014 Diners’ Choice OpenTable® Award. The chain comes to us by way of the Boston suburbs, where the first one opened in 1994. According to the company website, founder Steve Silverstein was tired of driving into the city for great food. He wanted to address “the shortage of great restaurants with reasonable prices in the suburbs.” Apparently other suburbanites welcomed the concept, and the chain has now expanded to 20 locations across the Eastern Seaboard, with another slated to open in Pennsylvania this month. The Woodbridge location opened in June of 2013.

Come As You Are

NYAJ Woodbridge General Manager Jim Winters explained what drew the company to Prince William: “Because of the area, the demographics and the fact that we had an opportunity to get into the Stonebridge Town Center at a relatively early stage. Once we saw the plans for the town center, we really liked what we saw.” While the restaurant maintains the company’s focus on creative cooking and come-asyou- are dining, Winters said that the Woodbridge NYAJ is part of Silverstein’s new vision for the brand. “We’re the industrial chic kind of design and décor, with the high ceilings, more of the really nice furniture and tables,” said Winters. On any given night, the mix of patrons may contain couples on dates, co-workers enjoying happy hour, family gatherings and people still in workout clothes after wrapping up at the Sport & Health behind the restaurant. Which is just how Winters likes it. 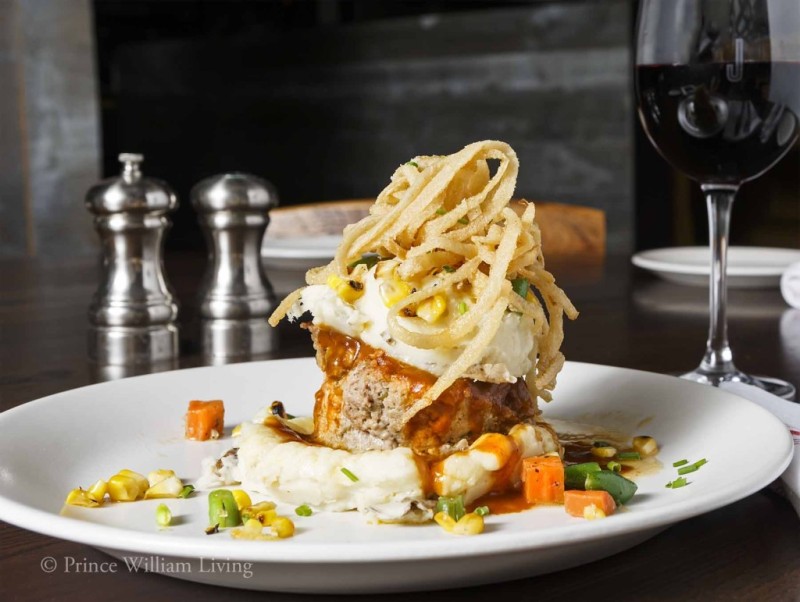 Anything But Your Average Meatloaf surprises with a mozzarella center and a topping of mashed potatoes in barbecue gravy.

“We cater to anybody who is living that active lifestyle and wants to eat healthy. We don’t make it too stuffy where they’ll feel out of place, you know, coming over from the gym,” said Winters. “But we also want to make sure this is a nice enough restaurant that our guests would enjoy coming here for an anniversary.” He added that a couple married there this Valentine’s Day, which he believed to be a first for any NYAJ.

A Growing Customer Base

Not Your Average Joe’s popularity goes beyond special events. “We’re very busy Thursday through Saturday. It’s insane how many people are repeat customers,” said waiter Donald Heinlein. “We do really good business. People like us.” As she finished up dessert with a group of five girlfriends, Stephanie Houde confessed to being a regular who comes about once a month. “The food is really good, and the ambiance is very nice, and it’s fun,” said Houde, who lives in Woodbridge. The women were splitting a dessert called “The Peanut Butter Thing,” which the menu lists as “peanut butter and chocolatechunks folded into vanilla ice cream and rolled in oreo cookie crumbs, topped with fresh whipped cream and drizzled with hot chocolate and caramel sauces tableside.” “The bread is awesome. The dip is amazing. The lemonade is very good. The Peanut Butter Thing we had for dessert is great,” raved Houde. She and her friends also said that they had all enjoyed the seasonal drink special, the “Strawberry Rhubarb Sangria,” which bartender Robert Albert listed as one of the restaurant’s most popular libations. Another patron, Sean McNeely, frequently comes through the Woodbridge area on business, and said he makes a point to stop at Not Your Average Joe’s each and every time. “The clam chowder is the best. I love it, and the food’s great. The menu rotates a lot. It’s always fresh,” said McNeely. “Everything else is so cookie cutter, but the menu isn’t, not here.” Creative Cuisine, Your Way This non-cookie cutter approach comes through in twists on classic recipes, like the “Anything But Your Average Meatloaf,” which tucks fresh mozzarella into meatloaf served with a side of sauteed vegetables and mashed potatoes covered in barbecue gravy. Nachos also get a makeover, with crisp, whole tortillas stacked in an artful tower that overflows with chipotle braised chicken, cumin sour cream and avocado corn salsa. Additionally, unique ingredients make an appearance on the seasonal specials such as the “Peachy Keen Kabobs,” described on the menu as “brown sugar and spice rubbed chicken, skewered and grilled, served with Larriland farm peach avocado salsa.” “We change up our specials menus every month to focus on seasonal and local ingredients,” said Winters. Larriland is located in Maryland, and is one of several area farms that supplies food to NYAJ. Another atypical aspect of dining here is the degree of menu flexibility. When your server says they can substitute or make anything, he means it. One server even offered to run to the nearby Wegman’s for ingredients if necessary. 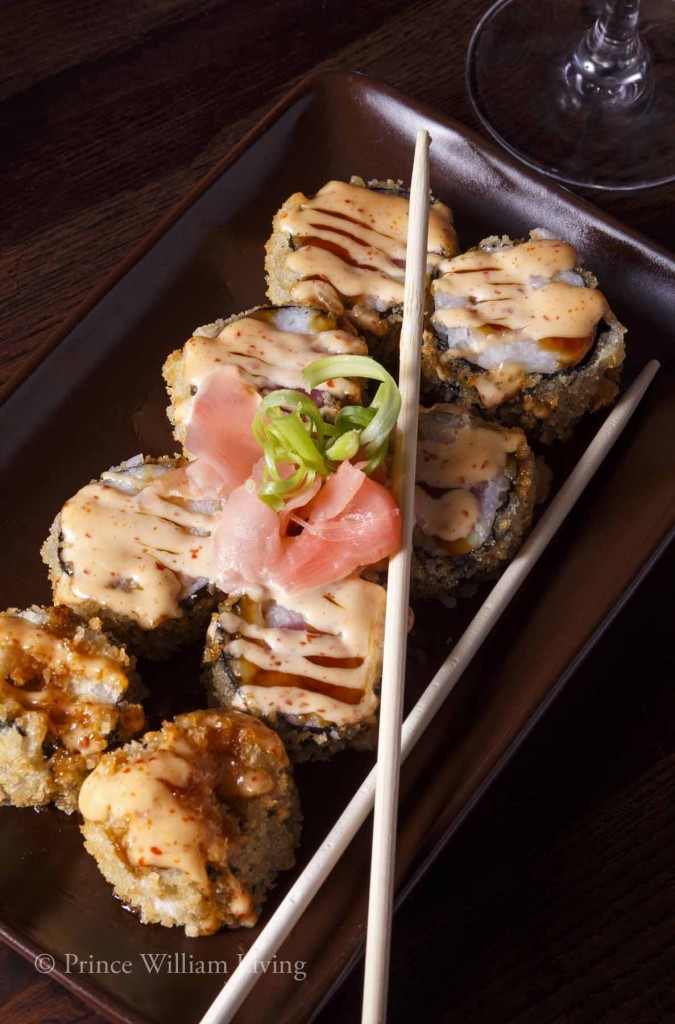 Tempura Maki Roll gives an Asian flair to the eclectic Not Your Average Joe’s menu, which includes rotating seasonal specials.

“We really truly believe in ‘Yes is the answer. What is the question?’,” explained Winters. “Our chef can create something for [customers]based on their needs and their desires and what their restrictions are. … We will find a way to make it work and do everything in our power to meet the requests of our guests.” Not Your Average Community Partner In addition to creative cooking and a customer-first mindset, community service is also on order at NYAJ. Winters said that each new location launches with a two-day charitable fundraiser, with all revenues going to a local not-for-profit. For the Woodbridge store, he said Wounded Warrior Project was a natural fit. “We did a few different events during our pre-opening to help with the Wounded Warrior Project … we really wanted to reach out and touch base with the military community with, you know, Quantico right down the street from us,” said Winters. The charitable giving continues with “Not Your Average Cause.” Area not-for-profits can apply online or in person to hold a “cause” event. If accepted, NYAJ assigns the organization a month during which it will receive 15 percent of the revenue from any patron it sends to the restaurant on designated days. To trigger the donation, diners must mention the name of the organization that they are supporting. “We try and schedule it every Tuesday of the month, and occasionally we’ll have a couple of other causes set up…we may schedule something for a Wednesday night as well, or Monday depending on the demand,” said Winters. “It’s really, really cool when we present that check to the individual or the organization, to kind of give back. It’s a really good feeling.” This mix of community investment, quality food and customercentric service lends NYAJ a neighborhood feel not always present in corporate restaurants. “I know [NYAJ] is from Boston. … But it doesn’t feel like a chain,” summed up McNeely. Not Your Average Joe’s is located at 5101 Potomac Town Place, Suite 150. Hours are 11:00 a.m. to 9:00 p.m. Sunday through Thursday, and 11:00 a.m. to 10:30 p.m. on Friday and Saturday. For more information call 571-989-5637, or visit notyouraveragejoes.com/woodbridge.

Emily Guerrero is editor in chief of Prince William Living and owns Mightier Than, a communications firm based in Northern Virginia. She is also a self-declared foodie who enjoys visiting the new restaurants popping up in Prince William, and can be reached at [email protected]