By Jason Shriner, The Aubergine Chef
Trying something new ranks as one of the most common New Year’s resolutions.  Another popular one in 2013  is saving money and getting out of debt, according to several news sources. If you made either of these promises to yourself this year you can work toward your goal and have your cake too.

If you’re looking to learn how to bake this year check out Julia Child’s “Reine de Saba” (Queen of Sheba) cake. As the world’s inspiration in cooking, Julia’s recipes are dependable. Her recipe is also challenging enough that you feel like you’re genuinely baking thanks to the egg white meringue step, but still simple enough you have little fear of failing. The accompanying chocolate butter icing recipe also makes exactly enough icing to coat the single cake layer. All of this adds up to an excellent introduction to your first scratch cake.

Few people realize how much money you save when you make your own dessert. On average you should expect to spend $7.00 for a single serving or $30.00 for a full cake at a bakery. This recipe will only cost you a little over $10.00* for 10-12 servings and the final product can be frozen for future use. Plus, because you’re making it yourself you can feel good about the ingredients going inside of it. 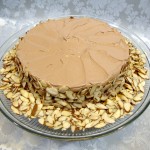 1.  Combine the almonds and 2 tablespoons granulated sugar in a food processor and grind into a fine powder. Over mixing may cause the almonds to get pasty.
2.  Combine the chocolate and rum or coffee in a bowl and melt over a double boiler or in a microwave. Try to keep it on the cooler side so it won’t melt your butter later on.
3.  In an electric mixer bowl wiped out with vinegar, combine the egg whites, salt, and 1 tablespoon granulated sugar and whip to medium-stiff peaks. Remove from mixer bowl and set aside.
4.  In the same mixing bowl, cream the butter and 2/3 cup granulated until light and fluffy.
5.  Beat in the egg yolks one at a time scraping in between each addition as needed.
6.  Using a rubber spatula, combine the melted chocolate mixture into the butter and sugar mixture. Then stir in the pulverized almonds and almond extract.
7.  Fold in the egg whites in 4 parts. After the second addition start folding in the flour in three parts. You should be alternating between egg whites and flour after the second addition of egg whites.
8.  Pour into a prepared 8” cake pan and bake at 350 degrees F for about 25 minutes. Test the cake with a toothpick or knife, it should come out oily. The cake is ideal when it is slightly underbaked.
9.  Cool cake completely. A crust may form on the surface, which can easily be peeled away and discarded. Ice with Julia Child’s Chocolate Butter icing and sliced almonds.

1.  Combine the chocolate and rum or coffee together and melt over a double boiler on in the microwave. Stir until completely melted and smooth then chill in the fridge until firm and cold but not hard.
2.  Place the chilled chocolate on your electric mixer and, using a whip attachment, whip the butter. Continue whipping until the mixture is of icing consistency.

Jason Shriner owns the baking & pastry blog The Aubergine Chef (www.theauberginechef.com) which contains free videos and recipes. He also teaches baking classes at the Manassas Park Community Center. You can visit his blog at www.TheAubergineChef.com.