Provided by Bank of America

In September, the nation’s first automated teller machine (ATM) to be powered by solar energy was installed at 14527 Jefferson Davis Highway in Woodbridge. It is the first of three installations Bank of America is planning to bring online in 2020, with the larger goal of incorporating solar power into design standards for all new remote ATMs.

The ATM upgrade is part of the Onsite Solar Initiative, through which Bank of America will install more than 60 solar panel installations across its entire operations, including financial centers, ATMs, office locations and other operational buildings. Nationwide, solar installations are already operational in more than eight Bank of America financial centers and office locations. 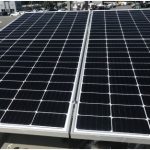 The new solar panels atop the Bank of America ATM in Woodbridge.

“This solar powered ATM in Woodbridge is an exciting milestone for the D.C. market and one more tangible representation of our commitment to environmental sustainability,” said Larry Di Rita, Greater Washington, D.C. market president for Bank of America. “Making progress toward carbon neutrality and 100% renewable energy substantially contributes to our goal of reduced emissions.”

As solar installations continue at Bank of America facilities across the nation, the Onsite Solar Initiative is expected to generate more than 25 megawatts of renewable electricity to directly power the bank’s operations.

These actions, along with others, move Bank of America closer to our broader environmental operations commitment. The organization achieved carbon neutrality a year ahead of schedule, and is reducing water usage, waste to landfill and bringing more electric vehicle charging stations to financial center and work facilities. In addition, Bank of America financial centers, ATMs, office locations and other operational buildings will benefit from a reduction in energy costs and greenhouse gas emissions thanks to the power of the sun.