Husband and wife team Sarah and David Devight, owners of Battle Street Bistro in Old Town Manassas,
have dreams. And those dreams involve great food and building a restaurant empire.

“We’ve always wanted to have multiple restaurants,” says Sarah Devight. “We really like Old Town Manassas, and it was an opportunity for us to set down roots in a top dining area of Prince William.”

In May, Battle Street Bistro had their official ribbon cutting ceremony and opened up their doors for diners to experience a delicious menu, with authentically French-based cuisine. It is the sister restaurant to the Secret Garden Cafe, echoing similar service styles and made-from-scratch specialty food and drinks.

A Trip to France

According to the Devights, while Battle Street Bistro’s menu is French themed, it has an American flair.

“We do our best to make it as authentically French as possible,” Sarah Devight says. “It may not be exactly like in Paris, but it’s pretty close!”

The restaurant’s French cuisine style stays close to her family roots. Her father is French, and she not only grew up eating lots of French food, but she also learned how to cook it at a young age. This was perhaps  early job training, as she is the head chef at Battle Street Bistro.

“We don’t cut corners,” Devight says. “Everything we make — from sauces to desserts — is made in house.”

The last few months have been extremely busy for the Devights. Since they opened Battle Street Bistro, business has boomed, and they hope the community comes to see the restaurant as a neighborhood go-to, whether diners are looking for a quick lunch or a leisurely brunch.

The building that houses Battle Street Bistro used to be an office space. But the Devights had the vision to  turn it into a welcoming, cozy bistro, complete with a roof-top terrace.

Diners need not worry about any Battles going on at Battle Street Bistro, Sarah Devight jokes. The name of  the restaurant was the brainchild of her mother, who thought to name the establishment for the road it’s  located on — 9402 Battle Street.

“We were discussing possible names — we didn’t want to call it anything ‘garden,’” Devight said. “So, my  Mom said, why not name it after the street? That’s how we came up with Battle Street Bistro.”

The service style at Battle Street Bistro is similar to the Secret Garden Café — each server pays close  attention to all customers and all tables, ensuring a seamless meal service with diners receiving prompt  attention throughout the course of their meal.

“Although we started [at Secret Garden]with sections, all our servers helped each other out and it set the  tone,” Devight said. “So, we decided to work as one team, and it’s been working out well for eight years so  far! Hearing our staff speak about what works best for them is crucial. They are the backbone of our business.” 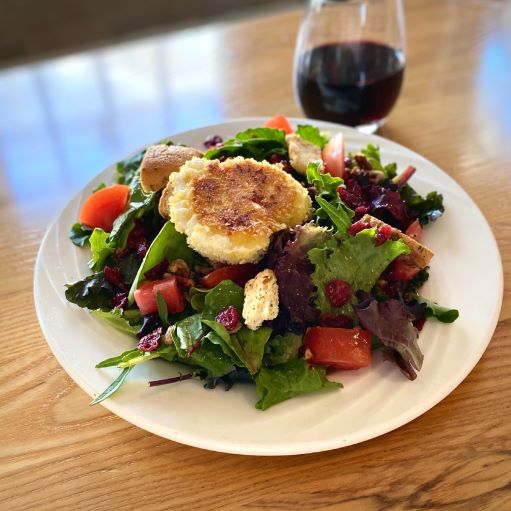 Battle Street Bistro serves up lunch, dinner and breakfast/brunch. From French Toast to Quiche Lorraine  and their signature Bistro Burger, the restaurant keeps up with classic French favorites along with other  twists like Shakshouka — a savory egg and tomato breakfast stew — Fish and Chips, and Shrimp and Grits.  Vegetarians can choose from both vegan and vegetarian options offered, such as vegan Scampi and vegan
Moroccan Couscous.

Devight’s favorite thing on the menu is the Poutine — similar to “Disco Fries” — a lovely combination of  French fries, cheese curds and gravy. The dish is said to have originated in Quebec and is a popular item at  Battle Street Bistro.

Rena Malai is a journalist and freelance writer. She has covered a variety of topics from technology and policy to food and lifestyle. She lives in Prince William and is a native Washingtonian.