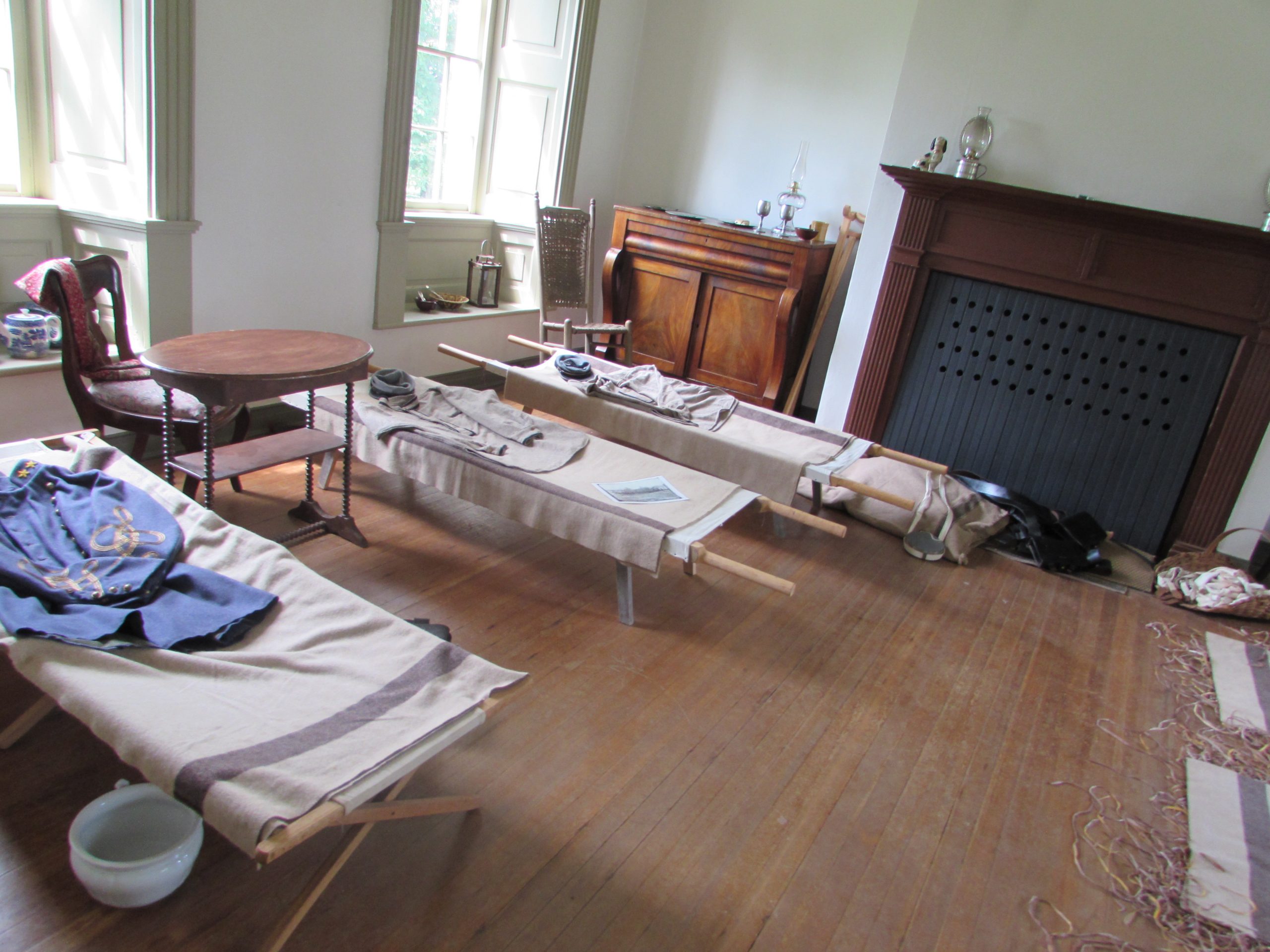 The home, which was part of a plantation, was built in 1832 by Benjamin Tasker Chinn.  He was a descendant of the Carter family, who owned much of what is now Northern Virginia.  He later leased the plantation to the Pringle family, who were also farmers.

When the Civil War began in 1861, the house became a field hospital.  The main road between the battlefield and initial Confederate positions, Blackburn’s Ford, ran on the east side of the house, and this was one of the closest homes to the battle that was not on the battlefield itself.  Like many homes during the battle, this house was seized by soldiers and made into a hospital.  (Other homes converted to field offices, officer quarters, or headquarters.)  The Confederate Army seized the home and brought their wounded here to be operated on.  While some soldiers survived, many of them died.

Later, the home was seized by the Union Army, who charged the Pringle family with trading with the Confederacy.  The furniture was destroyed, and the walls were covered with graffiti.  The Pringle family struggled to rebuild the home after the war.  They were eventually forced to leave the property.  In the twentieth century, the United States Surgeon General made the house their retreat home, and it became a large dairy farm.

Many historic sites in the Washington, D.C. area were overrun with development in the twentieth century, and the Ben Lomond House had the same fate. However, the home was spared from demolition, and preserved and became a historic property. A nearby church was once the site of slave quarters, which have been relocated to the Ben Lomond property.

Today, the Ben Lomond Historic Site is open for tours.  The house appears just as it did in the summer of 1861. There are beds and bandages, even blood stains, and the house smells like a field hospital.  The tour includes the relocated slave quarters, the smokehouse and dairy, the original site of the kitchen and a rose garden. Visitors can walk on a section of the road that went between the battlefield and Blackburn’s Ford.

The Ben Lomond Historic Site is located at 10321 Sudley Manor Drive, Manassas.  It is halfway between Historic Downtown Manassas and the battlefield off Sudley Road (Virginia Business Route 234).  The house is open for tours from May to October, Thursday through Monday from 11:00 a.m. to 4:00 p.m.  The grounds are open year-round from dawn to dusk.  Only the first floor of the home is wheelchair accessible, and wheelchairs will have difficulty on the original road.  Admission is $5.00, and parking is on site.

For more more information about the Ben Lomond Historic Site and other historic sites in Prince William County, visit  pwcgov.org/benlomond.

So Who is Ben Lomond?

So who is Ben Lomond?  An internet search brings up the name of a mountain in Scotland.  The Pringle family came to Virginia from Scotland and named the home after the mountain (Benjamin Chinn’s wife Edmonia named the house Ben Lomond, not the Pringles).  Chinn Ridge on the Manassas National Battlefield is named for Benjamin Tasker Chinn.

Visitors to Ben Lomond Historic Site will be surprised to find it’s not just another place overrun with development. They will find themselves in a time that once was and a place where soldiers once roamed.