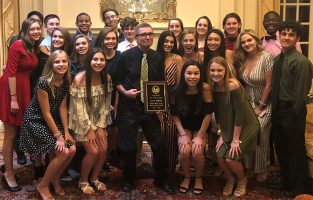 Shiring stands out not only for his ability to develop student leaders at Benton, but for his contributions as an advisor for middle school student councils at the state level. He is also noted for his role in planning middle school student leadership workshops for PWCS. Shiring has been a dedicated student council advisor for more than three decades, most recently for seven years at Benton. He previously served at Stonewall Middle School and at Enterprise Elementary School.

Shiring is “the epitome of positivity in a middle school,” said Graczyk. “His energy and passion for developing student leaders and having them give back to our school community is a key component of why Benton is such a great place to learn and work.”

Under Shiring’s leadership, and that of Kelly, Benton Middle School’s SCA has earned the VSCA Achievement Award for six consecutive years, including this year, for initiatives such as used book drives for students, public service announcements on school projects, and clothing collections for homeless families. The SCA also sponsored spirit week, hosted dances, and held a competitive fashion show between student and teacher teams.

“I enjoy working with SCA because it’s a great opportunity to develop student leadership in a very meaningful way,” said Shiring. “The projects and activities the students design and carry out can benefit both the school and community. It’s also extremely rewarding to see the growth of our student leaders during their time at Benton and then throughout high school,” he said.