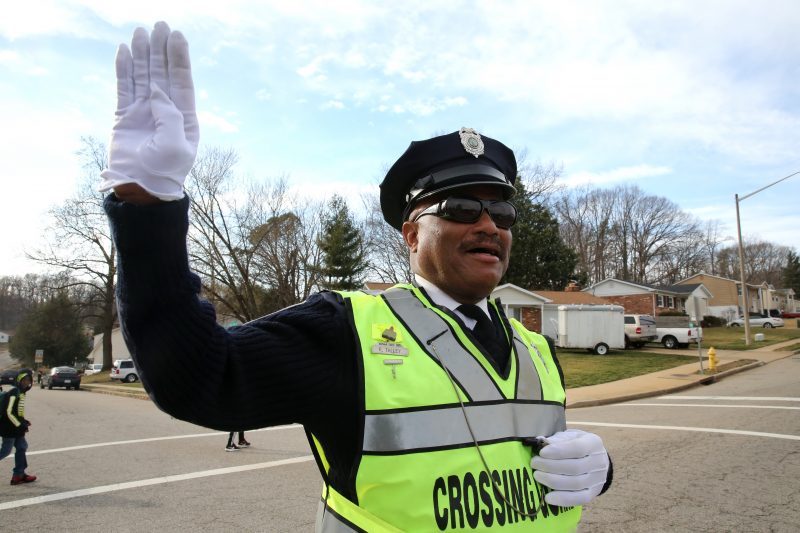 Prince William County Police Department Crossing Guard Roger Talley has been working the intersection of Darbydale and Eastlawn Avenues for more than 15 years, and he is one of six crossing guards from across the state to be named Outstanding Crossing Guard for 2016-2017 by the Virginia Department of Transportation’s (VDOT) Safe Routes to School Program.

Talley, who retired from Arlington County after 35 years of laying asphalt, landscaping, building bus shelters and removing graffiti, seems to take the job as seriously as he appears to enjoy it. “I love the job. I love the kids. When these kids come across here, they’re mine. They’re my kids. Their safety is my priority.”

In a letter announcing Tally’s accomplishment, Robert J. Williams, VDOT’s Safe Routes to Schools Program coordinator, wrote that Talley received 39 nominations that came mostly from students. “It is obvious that Mr. Talley is a role model and an outstanding crossing guard for Hampton Middle School. His commanding yet welcoming voice and pleasant personality play a big role at Hampton Middle School. Mr. Talley comes in at the beginning of each school year to talk to students about the importance of following the safety rules when walking to school. He greets every student that crosses towards school, and even other pedestrians, such as those heading to the public bus. He encourages and entertains the students in his brief daily contacts.”