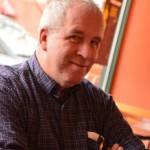 Some of my writer friends in Write by the Rails came to writing after other careers or upon the emptying of their nests, so we are of a certain age. I have written since I could write, but didn’t really get into it big time until a few years ago when I retired. Some of my colleagues have books they have worked on for decades–Nancy Kyme’s Memory Lake, a memoir of her time at a summer camp on Lake Michigan (http://nancyskyme.com/); June Kilpatrick’s Wasps in the Bedroom, Butter in the Well (http://www.amazon.com/Wasps-Bedroom-Butter-Well-Depression/dp/1592997546/ref=sr_1_1?ie=UTF8&qid=1357765611&sr=8-1&keywords=wasps+in+the+bedroom); and Leigh Giza’s Found and Lost, the story of a relationship told through photographs and haiku (http://www.amazon.com/Found-Lost-Leigh-Giza/dp/1467043192/ref=sr_1_2?s=books&ie=UTF8&qid=1357765693&sr=1-2&keywords=Leigh+Giza). We do have younger writers in the organization as well, which gladdens my heart. There’s Claudia Lefeve with her Travelers Series about alternative realities (http://www.claudialefeve.com/); Sheila Lamb’s Once a Goddess (http://sheilarlamb.com/); and college student Teddy McCormick, who contributed two telling poems to our New Departures anthology (http://www.teddymccormick.com/home).

But I’m not here to talk about older and younger writers in Write by the Rails. As someone who taught English and creative writing to high school students for over three decades, I can tell you this about “student writers”: the kids are all right!

A high percentage of my students wrote quickly and they wrote well. And no, I didn’t teach all A.P. or honors or IB classes. Quite the contrary. Toward the end of my career, I asked some of my better writers why they wrote so well. Their answer, basically, was that they had been doing it since they could hold a crayon. They dictated their stories to adults; they used “invented spelling” which later became standard spelling; they published class magazines and newspapers; and they wrote and they wrote and they wrote. By the time they got to high school, they were writers.

The writers in Write by the Rails realize we won’t be writing forever, so we think it imperative that we encourage young writers and bring them along. There are writing classes at the Manassas Center for the Arts (http://www.center-for-the-arts.org),  some of them taught by our members; the Virginia Writing Club sponsors a number of opportunities for middle and high school writers (http://www.virginiawritersclub.org/Default.aspx?pageId=1368953); the Northern Virginia Writing Project (http://nvwp.org/) based out of George Mason University in Fairfax has taught teachers how to teach writing  for over twenty-five years. Selected students have their work published every year in an anthology entitled Falling for the Story (http://nvwp.org/youngwriters/fallingforthestory/ –includes online editions).

So, if you know a young person who has been bitten by the writing bug, send them our way. They’ll fit right in.

Dan Verner is a local writer and member of the Virginia Writers Club.  He has been a local news columnist and now produces a thrice-weekly blog, Biscuit City (http://dverner.blogspot.com). He is currently revising On the Wings of Morning, a novel about an Army Air Force bomber pilot in World War II.