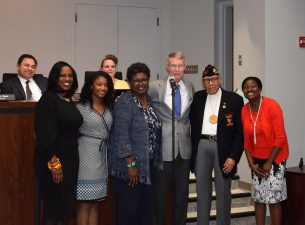 On Monday, Feb. 12, 2018, the City of Manassas celebrated Black History month by recognizing an aspiring journalist, future president of the Manassas Boys and Girls Club, the Head of Collections at the National Museum of African American History and Culture and one of the first African American Marines.

Logan Russell, a local aspiring journalist, was recognized for featuring journalistic stories on the Manassas Boys and Girls Club, producing anti-bullying videos for local teens and serving as a delegate for the 2017 Presidential Inauguration Leadership Summit, where she contributed to the winning white paper on Women and Global Leadership.

Courtney Holeman is a fervent supporter of various community projects and nonprofits, and a champion of youth development and leadership causes; including a Jack and Jill of America youth family ancestry workshop at the Manassas Museum.  She will serve as president of the Manassas Boys and Girls Club Board during the next term of office.

Dr. Renee Anderson was recognized for being the Head of Collections at the National Museum of African American History and Culture.  She has used her skills and talents to enrich the cultural life of Manassas with her willingness to mentor and positively impact the lives of area youth.

Mastery Gunnery Sergeant Carroll Braxton is among the 20 men who served in the Montford Point Marines, the nation’s first African American Marine unit that received the Congressional Gold Medal, and whose legacy as a trailblazing leader will leave a mark on history.

These African American innovators were recognized with a proclamation and one of the largest audiences to visit the City of Manassas Council Chambers.