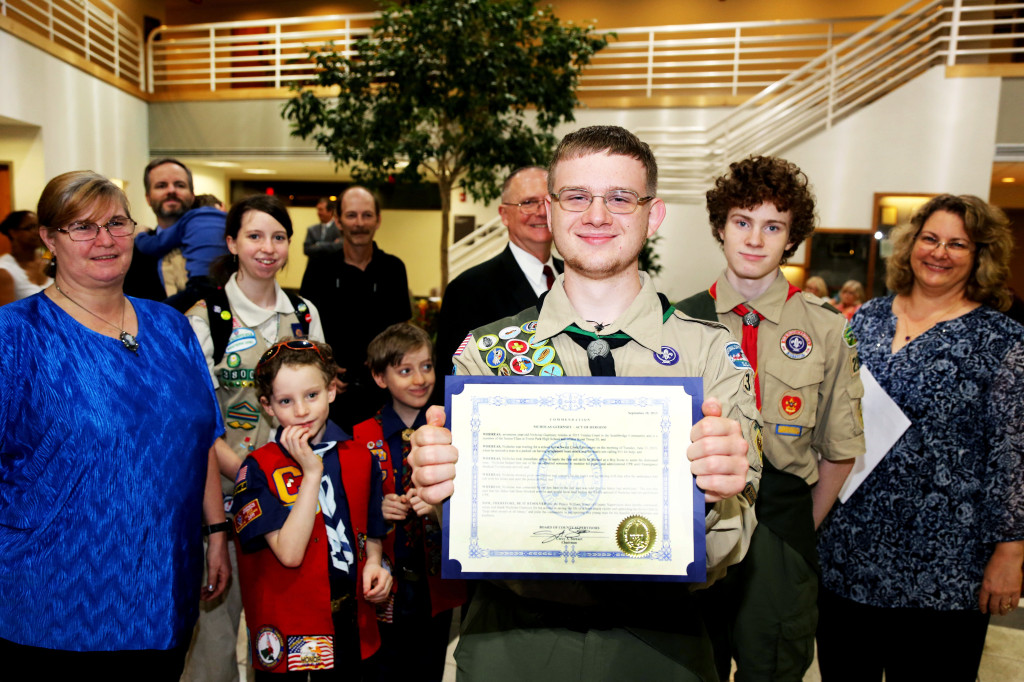 Nicholas Guernsey, with friends and family after recently receiving commendation for an ”Act of Heroism” from the Prince William Board of County Supervisors. Guernsey saved a man’s life by administering CPR as the man was having a heart attack.

Nicholas Guernsey took CPR training for a Boy Scout merit badge about four years ago and it paid off in June when he used his skill to save a man in the throes of a heart attack. The Prince William Board of County Supervisors recently recognized and commended Guernsey for his “Act of Heroism.”

Guernsey, of Boy Scout Troop 35, was waiting on a morning school bus at Swann’s Creek Elementary School on June 11, 2013, when he noticed a man in a parked car who seemed to be having a heart attack. Guernsey’s first aid training kicked in and he immediately went to the man’s aid. He helped him out of his car, directed someone to monitor his pulse and administered CPR until Emergency Medical Technicians arrived.
“His son was trying to get him out of the car,” said Guernsey, a Forest Park High School student. “That’s how I saw him in danger in the first place. Basically, everybody had cleared out a space and they were trying to find somebody in the crowd who knew what to do. I was surprised that I was the only one there who was capable of doing it.”
After the EMTs left, Guernsey stayed with the man’s son until police arrived. The son contacted Guernsey later that day told him that his father had stabilized, that he had three blocked arteries and would have died before the EMTs arrived if not for Guernsey’s help.
“I just can’t tell you what an inspiration you are to all of us,” said Prince William Chairman Corey A. Stewart during the commendation presentation on Sept. 12. “This is a real special day for all of us to be able to recognize you today.”
Guernsey said he was “proud and exhilarated” to receive the commendation, but mostly he was “thankful” that he was “able to do something to help.”
Guernsey’s mother Lorene Guernsey said she wasn’t surprised when she heard what her son had done. “I was totally flabbergasted, but it doesn’t surprise me in the least. He’s a level-headed kid and he just reacted without even thinking about it.”
After the presentation in the County Board Chambers, Guernsey, along with friends and family and most of Troop 35, out of the Quantico-Buck Keyes American Legion Post 28, were headed out for ice cream. “I go for the chocolate vanilla twist,” Guernsey said.
Share. Twitter Facebook Google+ Pinterest LinkedIn Tumblr Email
Previous ArticleCuisine de Commerce: 15 Local Food Providers + Food Drive
Next Article Occoquan-Woodbridge-Lorton Volunteer Fire Department Celebrates 75 years of excellence this weekend.