Every generation has its John Cusack with a boombox; this is ours and he is holding up a pen.

Never Lend A Book You Love To Someone You Only Like is a brutally honest collection of short essays about love by Garrett M. Carlson. 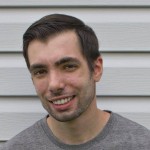 A Manassas resident, local English teacher, and member of Write by the Rails, the Prince William Chapter of the Virginia Writers Club, Carlson writes about love, romance, heartbreak, growing up, and growing old.

He read several of his essays at Arts Alive! at the Hylton Performing Arts Center on May 3. He also has performed open mic readings at Deja Brew Coffee House in Haymarket in good company with Piedmont Writers and published authors Robert Scott, and Milton Johns.

The public book release party for Never Lend A Book You Love To Someone You Only Like (This Charming Writer Publishing, May 2014, 170 pages) is being held at Giuseppe’s Italian Restaurant, 15120 Washington Street, Haymarket on Saturday, May 31 from 7 pm to 11 pm and is open to the public. The book is $15.00, and Garrett M. Carlson will be signing copies.

Mixing witty banter with earnest prose, Carlson captures the sights and sounds of being a transcendent twenty-something in a dating world he just doesn’t quite navigate clearly yet. Never Lend A Book You Love To Someone You Only Like is inspired by love, British pop music, and an excruciating search for the elusive “one.” This collection is for those who dream of the impossible while experiencing the spark of an unrelenting first kiss, the heart palpitations of a traumatic breakup and the general awfulness of attempting to date in the 21st century. 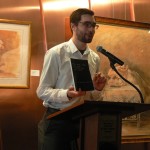 Garrett M. Carlson is a transplanted Virginian originally from an island in Western New York. He was raised on a “healthy” diet of buffalo wings, pizza, and losing sports teams, and fostered his art while writing columns for the University of Buffalo student newspaper, The Spectrum. He has had several pieces published online at ThoughtCatalog.com, UBSpectrum.com and WritebytheRails.org. His love for love, the alternative rock band Brand New, and pushing the boundaries of self-realization fuel his writing. He combines brutal honesty and observational humor with his hopelessly romantic paradigm.

If you can’t make the book release party for Garrett Carlson’s Never Lend A Book You Love To Someone You Only Like at Giuseppe’s Italian Restaurant on May 31, robots are fetching Carlson’s book for customers at Amazon.com around the clock. To contact the author, visit his website at www.gmcarlson.com