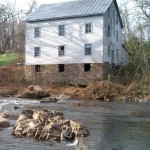 About ﬁve miles past the building boom of Gainesville, with its multiple traﬃc lights and fast food restaurants on Route 29, the road dips near the Broad Run and rises again.  It is here, tucked behind a few trees, that the remaining stone and wood buildings of the once-thriving mill town of Buckland still stand.

Few, if any, who drive this stretch of busy highway at the edge of Prince William County know about Buckland. There are no signs on Route 29 announcing its presence, not even a traﬃc light to curb the speeding cars as they pass. Yet Buckland residents are ﬁghting to make it known, hoping that its storied past will be the key to its preservation and its future.

“Buckland oﬀers us a unique historic resource not just for Prince William County history, but for American history.  And to have something like that right in our backyard—not every place can boast that…We are interested in making sure they preserve the site,” said Prince William County Planning director Chris Price.

“It’s humbling to realize what happened here. I didn’t know it. None of us did,” said David Blake, Director, Buckland Preservation Society chairman and owner of 550-acre Buckland Farm. “You had some of the big names in history—Washington, Jeﬀerson—all here in the little town of Buckland. There’s not one thing here. There’s layer upon layer that comprise a cultural landscape,” he said.

To unearth these layers, the Buckland Preservation Society has spent 10 years and millions of dollars, and worked with a variety of experts from such groups as the Association for the Preservation of Virginia Antiquities, University of Virginia and the Virginia Department of Historic Resources.  Yet there is much more research to do.  “ey are in the beginning stages in deﬁning what they expect are signiﬁcant archaeological deposits in Buckland,” said Justin S. Patton, Prince William County archaeologist.

Uncovering the Layers of its Past

Chartered in 1798, Buckland beat Haymarket by one year to become the ﬁrst inland town in Prince William County, even boasting the ﬁrst inland post oﬃce.  Yet its history didn’t begin with European settlement. Years before Buckland was chartered, Blake said it was an American Indian cultural and religious center. Numerous Indian artifacts have been found here, some dating back 8,000 years and from as far away as Connecticut.

Rather than religion, European settlers were drawn to Buckland for a diﬀerent reason: they saw commerce and opportunity in the waters of the Broad Run.  Like other towns across the county, they centered their commerce around a mill. That mill was already in place when Marylander Samuel Love arrived in 1774 and purchased property from Robert “King” Carter’s sons and son-in-law. Soon prosperous, Love constructed a two-story stone house on the property known as Buckland Hall (which is now owned by David Blake). Later, his sons would greatly expand the family business and create Buck Land, as it was ﬁrst known. 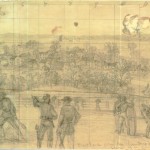 The Army of the Potomac- Buckland, scene of a calvary skirmish with Stuart.

According to the society’s website, when Love’s sons returned from serving in the Revolutionary War, they turned their father’s operation into a “vibrant mercantile center” with a distillery, tannery, another mill, and stores. Over time, outside merchants and tradesmen settled nearby on land rented or purchased from the Loves. By the end of the 18th century, the site says the area boasted additional shops, “a wheelwright, cooper, apothecary, boot/shoe manufacturer, saddler, woolen factory, two taverns, and a church – the essentials of a small town.”

Starting in 1797, eight years after he had inherited Buckland Hall from his father, John Love laid out a 48-lot plan around the original cluster of buildings on both sides of Broad Run. Love named some streets after famous men like Washington, Jeﬀerson, Lafayette and Franklin, and others for his family members. Elizabeth Street, for example, was named for Love’s wife.

Blake credits the enterprising Love, who would become a senator and a congressman as well as an attorney for inventor Oliver Evans, for bringing three state-of-the-art mills (at the time) to Buckland.  The mills used technology developed by Evans which automated the cleaning and moving of grain, increasing the eﬃciency and food safety of the process.  “Prince William  should be proud of that kind of innovation, that kind of technology. That’s our history. That’s our heritage,” Blake said.

Love was also a founder of the Fauquier and Alexandria Turnpike which was completed in 1828. That 16 and a half-foot wide macadamized road connected Fauquier Courthouse (now known as Warrenton) to Alexandria, and went through the middle of town.  Four of the town’s lots had to be condemned to make room for the road.  Remarkably, the town still has a small section of the original road and bridge abutments intact.

The Warrenton Turnpike, as it was later known, “helped facilitate development for Buckland and all around the county,” said Price.

It also opened Buckland to the world. Buckland can claim visits from such famous dignitaries as President James Monroe and the Marquis de Lafayette, who came to the Brooks Tavern where residents threw rose petals at Lafayette and read him poems, Blake said. The Robinson Tavern, which is still in the town, can even claim a visit by Andrew Jackson.

By 1835, the town’s population had grown to “180, including one physician” according to the society’s website. Unfortunately Buckland’s fortunes were short-lived. The railroad that arrived in the 1850s and enabled other communities to thrive completely bypassed Buckland. “It’s fueled by the turnpike era, and when it dies is when the railroads come in,” said Blake.

Still the little town hung on and business continued in Buckland until the Civil War. Because of the town’s proximity to the Manassas Battleﬁeld less than 10 miles away, Buckland residents witnessed Union and Confederate troops clashing over the turnpike and Broad Run bridge in a skirmish that precipitated the Second Battle of Manassas in August 1862. A year later, in October 1863, Confederate and Union cavalry including troops commanded by Union General George Armstrong Custer clashed over the same ground in what became known as the Buckland Races.

“It’s that cavalry engagement at Buckland that makes people read books about it and want to come see it today,” said David M. Born, historic program coordinator with the Prince William County Department of Public Works. Throughout 1861 and 1862, the Confederate cavalry had a deﬁnite advantage over the Union cavalry, but the tide was turning in 1863.  “With the Buckland Races the fact that Confederates chased these Federals out of Buckland is a big morale boost. It had not been a real stellar year for Confederate cavalry,” he said.

After the “grand rout of Kilpatrick’s Yankee Cavalry” as one Confederate soldier put it, there were 230 killed and wounded. Some of those dead were buried nearby.  According to Blake, the Federal Government removed the Union dead and reinterred them in Arlington Cemetery in 1917, leaving the Confederate dead behind. The society recently put markers on the known grave sites of those men. 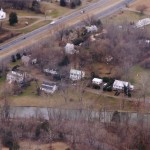 The years after the Civil War were not kind to Buckland. As time wore on, the mills, taverns, stores and even the post oﬃce all closed.  Then, the development boom hit the Gainesville area in the late 1990s, and Buckland residents faced a new threat.  Instead of selling out to developers, many of the residents banded together in 2003 and established the Buckland Preservation Society, a non- proﬁt foundation dedicated to “preserving the historical integrity of Buckland.”

According to Blake, the foundation is set up to buy properties at full market value and to work with the Federal government to create easements so they cannot be developed. Society president Linda Wright, who moved with her family to Cerro Gordo Farm in 1983, said, “Over 200 acres of the Buckland Mills Battleﬁeld and town are in permanent easement with the National Park Service/Department of Historic Resources.”

A few society board members like Thomas Ashe, Wright and Blake, have gone even further, using their own money to purchase and preserve additional  buildings and properties. “Usually the people who want to preserve the land don’t own it, but we do…Every family who owns it has a stake in it,” Blake said.

Many of these properties are included in the Buckland Historic District. Established in 1987, the original district contained only about 19 acres, less than half of the original town site. In 2008, the society successfully petitioned for the district to be expanded to 497 acres. “It [the petition]is one of the most diﬃcult to qualify for because the site has to be historically signiﬁcant on a national level,” Blake said. Included in the historic district are 21 original buildings on the National Register, dating from the 18th and 19th centuries. In addition, Buckland has the only historical overlay district in Prince William County, requiring the Architectural Review Board to approve any changes to the historic properties.

Even with these protections in place, in Buckland since 1818 and whose ancestor Jacob Delaplane owned the Kinsley mill during the Civil War, said, “I can see Wegmans’ clock tower from my yard.”  Although the mill is no longer on the property, having been moved to Colvin Mill in Great Falls when Lake Manassas was constructed in the 1970s, Debutts’ family cemetery and slave Thomas C. Robinson’s cabin are still there. When asked why he stays, especially since 11 acres of his property is now under Lake Manassas, he replied, “My family heritage. My ancestors are in the yard. It’s been in the family for six generations. Why not stay?” 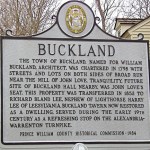 So what’s next for Buckland? Blake said the society would like to turn it into a tourist destination and noted that it is the halfway point on the Journey through Hallowed Ground, which runs from Gettysburg to Charlottesville.

“We haven’t made the site yet accessible to the public. That’s what we’re working on next,” Blake said.  The society has demarcated 2,333 acres to preserve the battleﬁeld core, and plans to restore the fences in the battleﬁeld area. The group also just purchased a building in nearby Fauquier County that they hope to turn into a museum. “We’re trying to restore the integrity of the historic landscape.

That is our mission. We want to get the public involved. We’re going to need their help,” he said. All those plans are years away, Blake admits. In the meantime, the unrelenting traﬃc on Route 29 continues to pass Buckland by. “People pass through on 29 and in a blink of an eye, they’re through it,” said Debutts.

Maybe Buckland will ﬁnally give them a reason to stop.

Carla Christiano is a native of Prince William County, admitted history geek and a technical writer for Unisys.

She can be reached at cchristiano@princewilliamliving.com.