The origins of Lebanese cuisine can be traced back thousands of years, but there is a local place that brings a modern twist to the Levantine style of cooking, which usually includes whole grains, fruits, vegetables, chicken, lamb and fresh fish and seafood. Sonia Boustany, owner of Byblos Taste of Lebanon, located in 6850 Piedmont Center Plaza in Gainesville, and her father, Walid, who serves as an advisor and consultant, created a restaurant dedicated to making fromscratch dishes that bring authentic Lebanese food to the region.

You may have heard of hummus, baklava (the sweet filo pastry dessert), baba ghannouj (the delicious eggplant dip), or the chickpea or fava bean deep-fried patties known as falafel, but this local family restaurant serves all the traditional, authentic, homemade Lebanese food you can imagine.

The Story Behind the Restaurant

It’s what you read about in books or see on TV: A Lebanese immigrant came to the U.S. in 1976 with a dream of having his own business that mixes his Lebanese culture with American culture. The melting pot was a very real dream for Walid Boustany. What started with his grandmother’s preparation of “the most delicious traditional Lebanese food” and getting him involved in helping her with the cooking fueled his fire to start a restaurant someday.
That day came in 2001, when Walid Boustany opened up Aladdin’s Eatery in Burke, followed a few years later by another location in Shirlington after he trained his daughter, Sonia, to manage the Burke location. Several other restaurants followed, including another location in Ballston and a restaurant called Laziza in Fredericksburg, among others.

Sonia wanted to continue the family restaurant business tradition and expand, so they found a location in Gainesville, close to Haymarket, and opened in 2016. Sonia now owns and operates Byblos Taste of Lebanon.

What’s in a Name?

Byblos Taste of Lebanon is not only a beautifully decorated family restaurant with seating for 74, it is named after the second-most ancient city in the world, located in Lebanon on the Mediterranean Sea. Byblos is one of the oldest continuously inhabited cities in the world and is a UNESCO World Heritage Site.

Luckily, you don’t have to travel all the way to Byblos to get all-natural, high-quality Lebanese food. Authentic to its core, Byblos offers a diverse menu that even includes more than 20 vegetarian dishes, all made from scratch using spices imported from Lebanon.

The food is made with high-quality ingredients, even to the last grain and spice. Isabelle de Vooght, a Manassas resident who recently enjoyed a meal at Byblos, said, “It’s a great place for authentic and flavorful Lebanese food in a casual setting. My favorite dish is the lamb kebab.”

The lamb kebab plate includes charbroiled pieces of marinated lamb tenderloin with grilled vegetables and a choice of white rice mixed with vermicelli topped with roasted almonds, garlic mashed potatoes or French fries. One of the most praised menu items is the pita bread, which is baked fresh every day. 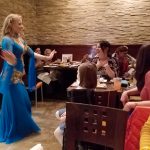 The restaurant also offers catering for all occasions for 20 to 300 people. Carry out and delivery are also available. Byblos Taste of Lebanon is open seven days a week starting at 11 a.m. and serves lunch and dinner. More details, photos and a menu can be found at byblosgainesville.com.

If you love Lebanese food or haven’t ever tried it before, stop by Byblos Taste of Lebanon for a modern, yet authentic, experience. “We create a place for people to have the freshest food and the most fun,” said Boustany. “You can’t go wrong with that!”