Today quilts and other home goods are generally mass produced and easily accessible in retail stores and online. This has not always been the case. Originally, crafts such as quilting were a necessity for many families as well as a way to pass on family history and traditions.

The mission of the local nonproﬁt group Cabin Branch Quilters (CBQ) is to keep the tradition of hand quilting alive in Prince William. The guild is 160 people strong and includes members of various quilting experience levels.

Founded in 1989 by Paula Golden, the group is named after the Cabin Branch Mining Company, which operated a pyrite mine in the late 1800s and early 1900s in Dumfries, in what is today Prince William Forest Park. According to CBQ President Ginny Rippe, the name is an homage to the American dream, which historically has been built on families working hard and sacriﬁcing to make things better for the next generation.

“The [mine]workers sacriﬁced … through hard work to give their families a chance to see some social and economic success,” said Rippe, adding that the reference is also meant to serve as a reminder of family traditions such as quilting.

“Quilting is an art which crosses generations. … Memories are in the stitches, the pattern and the fabric,” said guild member Kathy McLaren. “Quilts oﬀer glimpses to the past, comfort in the present and hope for the future. A quilt holds the love of the quilter, embraces the recipient in that love and keeps on giving love even when it’s worn and threadbare.”

The CBQ is funded in part through an annual Prince William Arts Council grant. “We use the grant to support quilting in the community and quilting education,” Rippe said. “Members promote, encourage, maintain and exhibit the art of quilt making … [and]sponsor educational activities, including lectures, workshops and demonstrations pertaining to quilt making.” 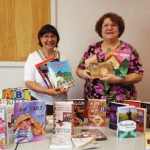 Cabin Branch Quilters donated books about quilting to Chinn Park Library, where members of the nonprofit group regularly meet to share their love of this traditional craft.

To spread awareness of their craft, and to recruit potential club members, the group oﬀers a “Chinn Bees” class every four to six weeks at the Chinn Park Regional Library in Lake Ridge. Classes typically draw groups of 20 to 30 experienced and would-be quilters, Rippe said, adding that these sessions provide beginners with the know-how to begin making their own quilts. Experienced quilters are also able to spend time on their current projects.

One of the group’s biggest events is the annual Quilt Show held at the Prince William County Fairgrounds each March. Last year 665 people attended the show, which showcased more than 200 quilts. “Cabin Branch Quilters oﬀers members a forum to share and promote their love of quilting,” said Rippe.

CBQ co-hosts the show with Stone House Quilters, its sister group in Manassas. While the quilts on display are not for sale, the show features a raﬄe and a silent auction where a number of quilts, patterns and quilting supplies are sold.

Funds raised cover the cost of hosting the show, as well as support the quilters’ educational programs, guild operational expenses and supplies for quilts that CBQ members make for local charities. Each year the membership also selects a charity to receive 100 percent of proceeds from the quilt raﬄe. “This year’s charity is the Alzheimer’s Association,” Rippe said. “We hope to raise about $3,000. … Last year we gave over $4,000 to the Wounded  Warrior  Program.”

CBQ’s charitable eﬀorts don’t stop there. The group also donates quilts to charitable organizations, such as Action in Community

“The Cabin Branch Quilters have donated hundreds of beautiful quilts for the children who reside in our safe houses. The children are allowed to take the quilts with them when they leave. What a warm and comforting gift,” said ACTS Turning Points Domestic Violence Program Director Dotty Larson.

To further promote their craft, several CBQ members have published books on the subject, including Shannon Shirley’s “Creating Children’s Artwork Quilts” (published in 2012) and Mary Kerr’s “A Quilt Block Challenge: Vintage Revisited” (released in 2010) and “A Quilted Memory: Ideas and Inspiration for Reusing Vintage Textiles” (published in 2011).

Some group members have achieved wider recognition for their skills. The Professional Quilter Magazine named Golden 2001 Teacher of the Year for her work as a quilt artist and teacher. She is also president of the Virginia Quilt Museum’s board of directors. For her quilting-related volunteer work, McLaren received a 2012 Seefeldt Award for Arts Excellence from the Prince William County Arts Council.

CBQ oﬀers members a social outlet and an environment to do an activity they enjoy. “We have connected and made lifelong friendships, brought together by the art of quilting,” said CBQ member Jane Miller. “We … escape with friends [who]understand our passion for learning a new technique, ﬁnding the perfect fabric or buying something ‘just because we need it.’”

To learn more about Cabin Branch Quilters, visit www.cabinbranchquilters.org. CBQ meetings are at 7 p.m. the fourth Monday of each month at the Lake Ridge Baptist Church.

Stephanie Tipple is a college student, journalist and community leader. She resides in Woodbridge. She can be reached by email at stipple@princewilliamliving.com.