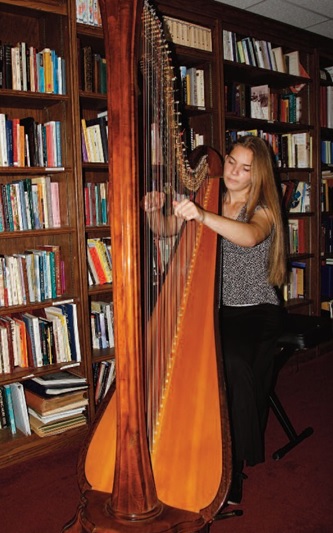 Cambria Van de Vaarst, of Woodbridge, is a musical “Renaissance girl,” according to one inﬂuence in her young life. “She’s multitalented musically,” said Annease Hastings, music director at Bull Run Unitarian Universalists Church (BRUU) in Manassas, where Van de Vaarst participated in the church youth choirs as a parishioner from 2004 until about 2011.

“I will play pretty much anything that you give me, and I will ﬁnd out how it works,” Van de Vaarst said.

Van de Vaarst’s talent goes deeper than that, though. “She has innate musicality. When you listen to Cambria, she makes music. She doesn’t just play the dots on the page,” said Hastings.

“She’s very musical and also a terriﬁc sight-reader. She can read anything,” said Elizabeth Blakeslee, second harpist with the National Symphony Orchestra (NSO). Blakeslee has been instructing Van de Vaarst on the concert harp for about three years, she said.

Sight-reading is the ability to read and perform written music at ﬁrst sight. Highly skilled musicians can sight-read silently, looking at the printed music and hearing it in their heads without playing or singing. “You put the music in front of [Cambria], and she can play it,” Blakeslee said.

“She has always been able to hear music … and as she has grown up, she’s been very determined to produce the music that she hears,” said Van de Vaarst’s mother, Jane Van de Vaarst. She said that Cambria began early along that path.

“My mother was very insistent that my girls get some sort of musical education when they were young, and she signed them up for ‘kinder’ music classes,” explained Jane, who also started piano lessons for Cambria and her older sister Tuppence when they were small. Cambria’s began when she was 5, Jane said.

But her exposure to music started even earlier. Shortly after Cambria’s third birthday, the family moved from Woodbridge to Germany where her father, Jeff Van de Vaarst, was stationed for six years as a U.S. Army cartographer, Jane said.

“She went to a German school … and the principal was very musical. They had a really good choir,” Jane said. Cambria was in the choir, which would perform at town Christmas markets. By the family’s last Christmas in Germany, “she was up in front singing solos, both in English and in German,” said Jane.

Cambria’s German was so impeccable, in fact, that her classmates did not believe she was American, Jane said. When she was about 5 or 6 years old, event organizers asked her to sing the U.S. and German national anthems during a Fourth of July picnic for the entire army base. “She sang both national anthems. … They had to teach her the anthem for the U.S. She knew the German but not the U.S. national anthem,” Jane laughed.

Cambria credited her grandfather, Skipper Van de Vaarst, with her young start in music. “He would play with a whole bunch of his friends out at a public auction. They would play country music,” she said. “I sang with them a lot, and that’s how I really started performing.”

Returning to Woodbridge in 2004 with her family, Cambria, who was home schooled along with her sister, continued to study music. Her parents added lessons for additional instruments as her musical interest grew. Some, such as the Celtic harp, she taught herself.

“My father had bought a South American folk harp back when I was a baby, and it had been sitting in the attic,” Cambria said.

Then she attended the Scotland wedding of her aunt. “They had Celtic harps there. I saw a harp, and she let me try it out. And so I came back home, pulled [the harp]out of the attic, started tuning it and tried to teach myself how to play,” she said. “I was probably about 10. … I kind of ﬁddled around with it for a couple of years before I actually started to learn how to play it.”

As a BRUU youth choir member, Cambria auditioned to participate in concert performances with Hastings’ encouragement. She was one of seven in the choir to perform in St. Louis in 2006 in a national Unitarian Universalists children’s choir of more than 65 members, Hastings said. Cambria also was accepted in an honor choir a couple of years later with the American Choral Directors Association. The choir, which consisted of at least 75 children, performed at an association gathering in Fredericksburg, Hastings said.

But a side-by-side harp rehearsal about two years ago at the Kennedy Center with NSO principal harpist Dotian Levalier is a personal highlight, Cambria said. She was there with other members of the Youth Symphony Orchestra of Youth Orchestras of Prince William, as part of a NSO youth fellowship program.

The youth symphony including Cambria also performed in March at New York City’s Carnegie Hall in the National Band and Orchestra Festival. The group was selected to participate based on a competitive audition process.

“It was fantastic. The acoustics were brilliant. It was a wonderful space to perform in, although the people backstage kept trying to take my harp away,” Cambria laughed. “The people backstage are used to moving performers’ instruments. … I said, ‘No, I’m going to go with my harp, and I will know where it is so I can tune it.’ They were impressed that I would not let anybody handle the harp.”

It was former Trinity Episcopal Church music director Kevin Feltmann who encouraged Cambria to learn the organ and taught her how to play it, Cambria said. “Cambria is a very dedicated student. … She has come a long way,” Feltmann said.

This fall Cambria began classes at Shenandoah University Conservatory of Music in Winchester. She is pursuing a dual major in harp performance and organ as part of a concentration in church music, she said.

Freelance writer Val Wallace, of Manassas Park, is a regular contributor to Prince William Living and is also on the magazine’s editorial staﬀ. She can be emailed at vwallace@princewilliamliving.com.