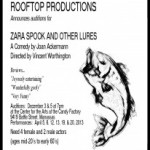 Auditions will be held December 3 and 5 for the Center for the Arts’ Rooftop Production comedy ZARA SPOOK AND OTHER LURES by Joan Ackermann.  Three women drive cross country to compete in the annual Bass ‘n Gal Fishing Tournament, but before they even cast a line, two men get hopelessly hooked.  With the World Championship and two marriages at stake, the anglers pull out their trickiest lures to match wits with lovers and fish.  Confronted by beanie-shooters, rifles and rattlesnakes, the women discover that men are more difficult than fish to unhook.

Two male and four female actors (age range from the mid – 20’s to late 50’s) are needed for this zany production which is directed by Vincent Worthington.  Actors should prepare a short monologue of 1-2 minutes and will be asked to do cold readings from the script.  Auditions will be held at the Center for the Arts at the Candy Factory, 9419 Battle Street, Manassas at 7pm on Monday, December 3 and Wednesday, December 5.  Please call the Center to RSVP for an audition at (703) 330-2787.  Performances will be held at the Kellar Theater in the Candy Factory at 8pm on Fridays and Saturdays, April 5-20, 2013.  The Center for the Arts website is www.center-for-the-arts.org.