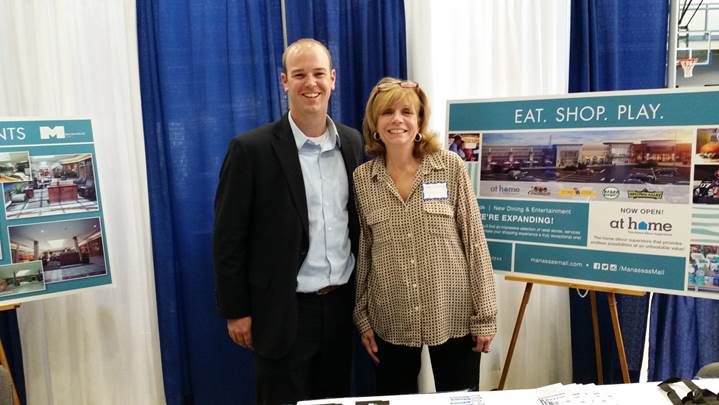 Manassas Mall was a Presenting Sponsor for Connections 2015. Michael Gately, the mall’s General Manager (left) and Kelly Gilfether (right), the Marketing Manager, manned the booth to talk about the changes that continue to roll out at Manassas Mall. Since the beginning of 2015, the management team has introduced new anchors, a remodel and entertainment destinations all while increasing the mall’s online and social media presence.

On the evening of October 22, community-minded residents and business people explored ways to give back during the Prince William Chamber of Commerce’s annual CONNECTIONS expo at the Freedom Aquatic & Fitness Center in Manassas. The event is a showcase for products and services offered in Prince William County and the Cities of Manassas and Manassas Park, this year with a focus on buying local. CONNECTIONS 2015 offered tasting stations for locally made artisanal products and the chance to get to know the people behind local businesses. The energy in the room was contagious as people looked for ways to support the community through thoughtful spending and volunteerism.

One community member also walked away with just a little bit more to spend with local businesses! Joann Kamauff won $500 courtesy of Prize Sponsor Apple Federal Credit Union.  Many others won door prize drawings hosted by the nearly 100 exhibitors and sponsors, from a night’s stay at Poplar Springs Inn & Spa to a gift basket of locally roasted coffees from Monument Coffee Roasters.

“In a time when many Chambers of Commerce have had to stop hosting a community tradeshow due to lack of interest, we continue to be blessed to serve a community where the people come out in support of local businesses,” said Chamber President & CEO Debbie Jones. “The energy in the room was phenomenal. People got to try olive oil tastings from So Olive and Manassas Olive Oil Company. They met the people behind logos we see everywhere, like My Plumber Heating & Cooling and the Manassas Mall.  For anyone who was interested there were three different massage therapists that people could talk to regarding treatment, and even try them out with a complimentary seated massage. There really is so much power in making these kinds of personal connections. Many don’t realize it, but that’s a big part of why our Chamber exists, to facilitate those connections and encourage people to seek ways to support local businesses. It’s a little thing that makes a huge impact on our thriving local economy.”

To view the photo album from the event, visit facebook.com/pwchamber.