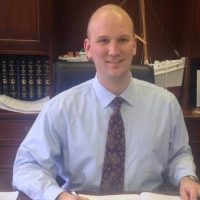 Ross Snare is the new Director of Government Relations for the Prince William Chamber of Commerce. He started in his new role on April 23.

A graduate of Christopher Newport University (CNU), Snare comes to the Chamber from Chairman Corey Stewart’s office, where he served as the Chairman’s Legislative Aide. As Chairman Stewart’s Aide, Snare was the liaison to the business community and assisted with budget, legislative, business and economic development issues. He previously served as the Legislative Aide to the Springfield District Supervisor in the Fairfax County Board of Supervisors and as an Aide in the Virginia House of Delegates.

“Business isn’t a single party issue, it’s a bi-partisan one” Snare said. He looks forward to advancing business issues and interests in his role at the Chamber. “Working with Chairman Stewart, I got to see businesses as they work, and to be part of making connections from the government point of view,” Snare said, “and now, I get to work directly with them and help promote a business friendly environment.”

Snare’s passion for government and politics began before college, but took off when he arrived at CNU in 2009. Jumping in head first, he ran for class president and won. A few weeks later, he became the youngest student body president at CNU. Later, he was the youngest person elected to the CNU Alumni Society Board of Directors, and in 2016–2017, he served as President of the Alumni Society. “I like to be involved, see where things can be improved, and take the lead to make the changes needed to be more successful.”

Snare’s first order of business is to “dive head first” and reach out to Chamber members and elected officials and re-introduce himself. “I like to solve problems and get things done,” Snare said. “There are a lot of people who want to help and it’s a matter of bringing people together to do that.”