According to Paula Otto of the Virginia Lottery, Prince William County Public Schools are the top recipients of lottery money in the state. The City of Manassas last year received $8 million. The City of Manassas Park received $4 million. Later this week the Virginia Lottery will be back in Prince William County to surprise a local educator with special recognition.

At the conclusion of the program, the Chamber also recognized three local high school students for their excellence in academics and their work in the community. The 2017 scholarships were sponsored by Lockheed Martin, Micron Technology, Inc. and Bookworm Central. 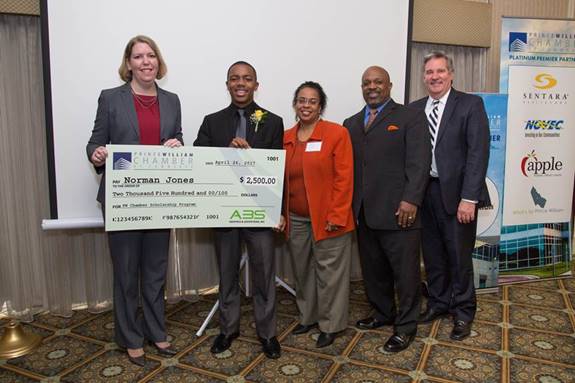 NORMAN JONES: Norman will graduate from Stonewall Jackson High School earning his International Baccalaureate diploma. Ranked in the top 5% of his senior class with a 4.4 GPA, he not only challenged himself by completing the IB program classes but also completed 150 hours of community service.

Norman has been a volunteer for Today’s Students, Tomorrow’s Teachers; Peer Diversity, his school’s Indoor & Outdoor track and tennis teams; and he is the drummer in the Music Ministry at First Baptist Church in Manassas.

Norman’s goal is to major in Public Administration and become an elected government leader. He looks forward to a college education which will provide him with the foundation for understanding the technicalities of government and how the process of making real change works. He wants to be one of the few to turns words into action! In 10 years, Norman hopes to complete his Master’s Degree in Public Administration and a Bachelor’s Degree in Journalism. He plans to be a part of the state government here in Virginia working to make positive change in our state as well as gaining experience to prepare him for Congress, and as Norman said, “possibly the White House one day.” 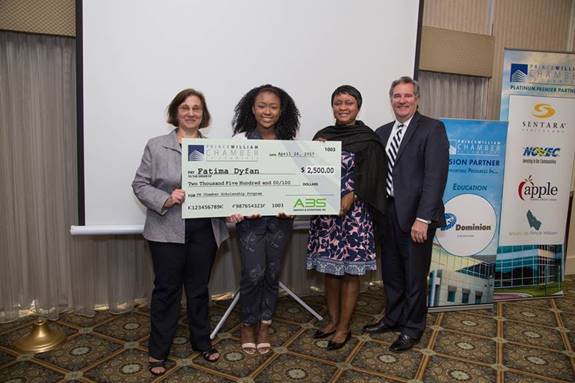 FATIMA DYFAN: Throughout her four years at Woodbridge Senior High School, Fatima has been an involved leader. She was the first female minority Class President, President of the Thespian Honor Society, a Member of the Virginia Student Council Advisory Committee and the Varsity Cheerleading Team, to name a few. Through her leadership as Class President, Fatima executed three school dances, an outdoor movie night, and the school’s first Multicultural Night. These and several other events raised over $15,000 for her Class in under two years.

Fatima has been a math tutor for middle schools students and a volunteer at the Fairfax Nursing Center. She helped teach dance, and track & field to the students at Rippon Middle School. In addition to her volunteer work, Fatima is an employee at Laser Quest in Woodbridge.

As busy as she is in these many roles, Fatima’s true gift and passion is in theater. She has been the lead in theatrical performances from “The Wiz” to Shakespeare’s “Taming of the Shrew” and “Othello.” Fatima is not only a talented and intellectually exceptional student but has a maturity beyond her years and the perseverance to tackle any obstacle. Over the next four years, Fatima plans to earn a degree in Political Science, a springboard to the next step in her mission to make a real difference towards social reform. 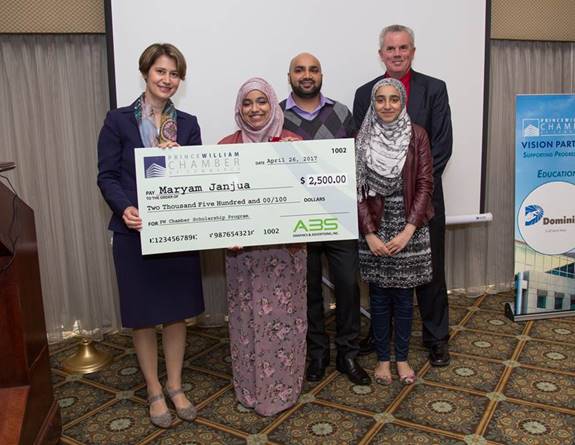 MARYAM JANJUA: In addition to being an accomplished student, Maryam is fluent in English, Urdu, Punjabi, Hindi and French. Her leadership roles include being the President of the Manassas Park Medical Leaders Society, Treasurer of the National BETA Club, and Treasurer and Ambassador of the National Society of High School Scholars. She also launched a project in Manassas Park to help eradicate bullying.

A favorite quote of Maryam’s is from Ghandi, “The best way to find yourself is to lose yourself in the service of others.” Outside the classroom, Maryam has volunteered her time in the community. For four years she has volunteered at the Family Food Market and aiding the elderly. Last summer, she was an intern for Novant Health UVA Prince William Medical Center. Through her internship, she took care of patients who were sick, injured and disabled when nurses were occupied with other patients. Maryam also worked at the front desk as the first person seen when patients arrived, offering her assistance.

When Maryam was 12 years old, she suffered a ruptured appendix. She sat, suffering, in the hospital waiting room in an underdeveloped country for eight hours. Finally a complacent doctor arrived. When Maryam asked him if she was going to live, his response was, “I don’t know, I hope you said your goodbyes, now pray.”  Just a year ago, Maryam’s father lay in a hospital bed fighting for his life after a heart attack. These experiences have motivated Maryam to major in biology and become the kind of doctor she wanted so desperately those six years ago: one who offers each patient the care and encouragement they need to recover. She plans to become a surgeon, encouraging changes in lifestyles and improving good health, one person at a time.