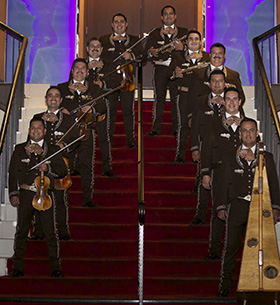 On May 6 at 8:00 p. m., the Grammy-Award winning ensemble Mariachi Los Camperos will perform its signature upbeat and joyful Mexican folk music to commemorate the Cinco de Mayo holiday.

The band has serenaded adoring audiences around the world since its founding in 1960 by the legendary Natividad “Nati” Cano, who brought mariachi out of the cantinas and into the concert hall. This group of the best mariachi musicians from the U.S. and Mexico continues his legacy, leading to the performance and preservation of this traditional music, while also working to expand the repertoire.