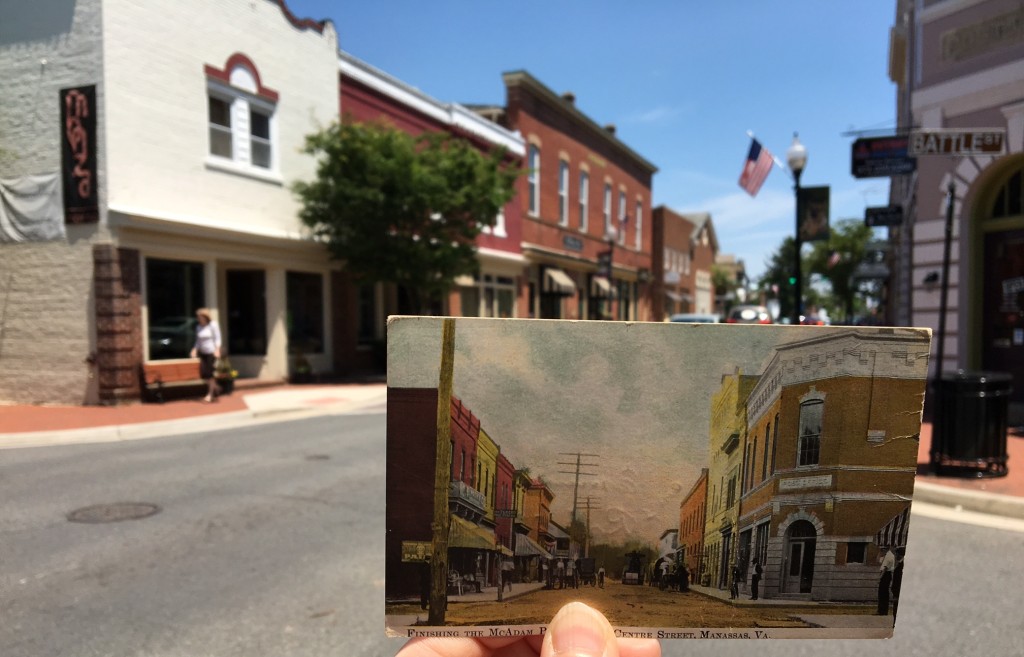 Lisa Sievel-Otten, City of Manassas Community Development Administrative Assistant, has authored her second book and is donating all proceeds to Liberia Plantation restoration efforts.
Manassas, a new book that gives a glimpse into life in post-Civil War Manassas through vintage post cards, tells surprising stories from the emerging town and about the creation of the Manassas National Battlefield Park.  Only a decade before, early Manassas residents had been on opposing sides of a deadly battle. And yet they came together in the 1870s to build a town and a sense of community.  Many of the book’s images exist only in post cards. Without these post cards, no visual record of many Manassas buildings, sites, and streetscapes would remain.
“In a time when instant communication meant walking down the street to a neighbor’s house to deliver some news, Manassas citizens also helped to build a strong community by joining churches and civic organizations,” said Sievel-Otten. “Much of the town turned out for school concerts and ball games, Dairy Festivals and Horse Shows.”
The book also recounts the role of railroads, the establishment of the Commonwealth’s first public school, the establishment of the nationally known Manassas Industrial School for Colored Youth, and the emergence of the town as a tourist destination for those visiting the Manassas National Battlefield.
Sievel-Otten, who has led many tours for the Manassas Museum, helps to manage Liberia Plantation’s restoration, and produces publications and signage for the Prince William County Historic Preservation Division. She is also the author of Liberia Plantation: Sentry of the Ages, a short history published by the Manassas Museum that also benefits Liberia Plantation’s restoration.
“I hope readers will appreciate that early Manassas residents were able to overcome the division of the Civil War, and come together to build not only a town government, but a real community,” said Sievel-Otten.   “I hope they will also appreciate the struggles of African-Americans who were constrained by so many laws, yet built a positive community for themselves and their families.”
Manassas is available online at manassasechoes.com or by visiting Echoes, the Manassas Museum Store.
Share. Twitter Facebook Google+ Pinterest LinkedIn Tumblr Email
Previous ArticleImagine, Inc. Voted Best Graphic Designer in Prince William
Next Article ImageWerks Wins Best Photographer in “Best of Prince William” for Third Year!