The City of Manassas honored eight volunteers for their extraordinary contributions to the community in 2021 during a volunteer reception and dinner on Tuesday, May 10. 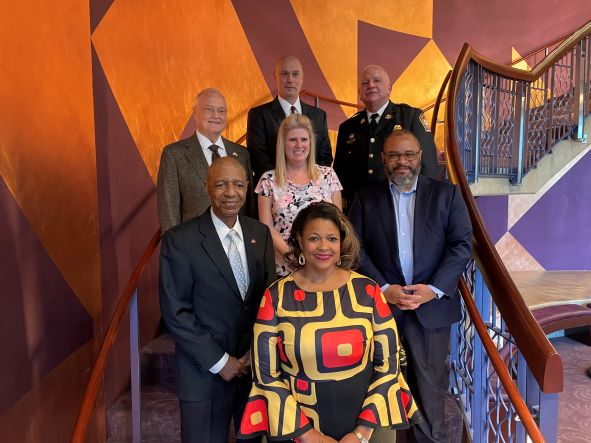 Mayor Michelle Davis-Younger with some of the volunteers

Larry Cain was named an Outstanding Volunteer for his work on the Social Services Advisory Board, which he has chaired for the last five years. Cain has supported and assisted with foster parent recruitment, community outreach projects, annual report presentations, holiday gifts for foster children, and staff recognitions and appreciation.

Harry Clark was named an Outstanding Volunteer for his work on the Planning Commission, where he worked on the city’s award-winning 2040 Comprehensive Plan, Old Town Sector Plans, zoning ordinance updates, and major development projects. In the last 15 years he also chaired the Board of Equalization, and he served on the Regional Airport Commission and Recreation Advisory Board.

Mike Flowers was named an Outstanding Volunteer for his work as an Auxiliary Police Officer for the last 23 years. Flowers augments police services by providing security and traffic control for community events and happenings like parades and Historic Downtown events, enabling more full-time officers to be available for emergency responses.

Doreen Frederick was named an Outstanding Volunteer for her work with the Manassas City Police Department and with its Crime Solvers program. Frederick has supported the planning and execution of events like National Night Out in addition to providing administrative and organizational support for the Department’s Community Services and Training and Recruitment sections. She also volunteers with the Manassas Museum, and Patriots for Disabled Divers.

Joe Hanlin was named an Outstanding Volunteer for his work leading the City of Manassas Community Emergency Response Team (CERT) as program manager for the last eight years.  Hanlin has coordinated administrative, finance, logistics, and training functions, devoting several hundred hours of his time each year to train new members in emergency preparation and planning. He also participates in CERT activations for the city’s major events, providing first-aid, safeguarding the railroad crossings, and assisting the Fire and Rescue and Police departments in protecting the thousands of spectators that come to Manassas to enjoy events.

Mary Kenney was named an Outstanding Volunteer for her work with the Greater Manassas Volunteer Rescue Squad (GMVRS) for more than 11 years. As the GMVRS faced additional pandemic-related challenges, Kenney voluntarily became an emergency vehicle driver trainer and a CPR instructor; ran the squad’s community relations program; rejuvenated the Junior Squad program; became an operational Lieutenant; and managed the squad’s uniform program. In 2021, she responded to 264 emergency calls and participated in at least 20 events.

Gary Orndoff was named an Outstanding Volunteer for his more than 20 years of service with the Manassas Volunteer Fire Company (MVFC), most recently as its Chief. Orndoff is responsible for staffing on nights and weekends, onboarding new operational members and helping them through the application process, and serving as a mentor and a coach. In his many roles with the MVFC through the years, fellow volunteers say he has always taken the motto “to protect and serve” seriously, working as many hours as necessary to get the job done.

Adam Sampiller was named an Outstanding Volunteer for his work with the Greater Manassas Volunteer Rescue Squad (GMVRS), most recently as its Chief. Sampiller stepped into the role of Chief as the GMVRS faced substantial changes and needed a leader. He led the squad’s transition as it moved to the City’s new Fire and Rescue facility, and fellow volunteers noted that he never hesitates to help the organization he calls his family.

This year’s volunteer reception was the first in-person reception since 2019.  It is usually an annual event to honor volunteers who support the City in a variety of roles. About 200 volunteers attended, representing various boards, commissions and committees, those assisting with the Police and Fire and Rescue Departments, and those working on Parks, Culture and Recreation initiatives.