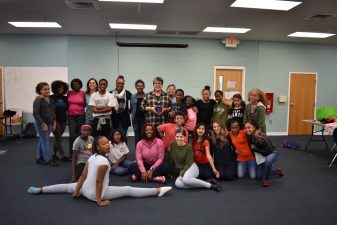 The City of Manassas Refuse and Recycling program has received the Virginia Recycling Association’s award for the second year.  This year, the award was received for educating young residents during the Project Recycle Runway program.

The children were taken on a shopping tour of Savers that provided inspiration and materials for their creations.  The budding designers then worked with volunteers to transform their pieces into runway ready pieces.  A panel of judges selected the winning design and awarded the runners up for the fashion show.

America Recycles Day was selected as the day for the fashion show, both this year and last year, as it is the only nationally recognized day for community driven awareness for promoting recycling.  The average American generates more than 82 pounds of textiles each year, which adds up to about 5.2 percent of all solid waste generated in the United States.  These students are learning that, by recycling textiles, they are not only creating original fashions, but being earth friendly in the process.