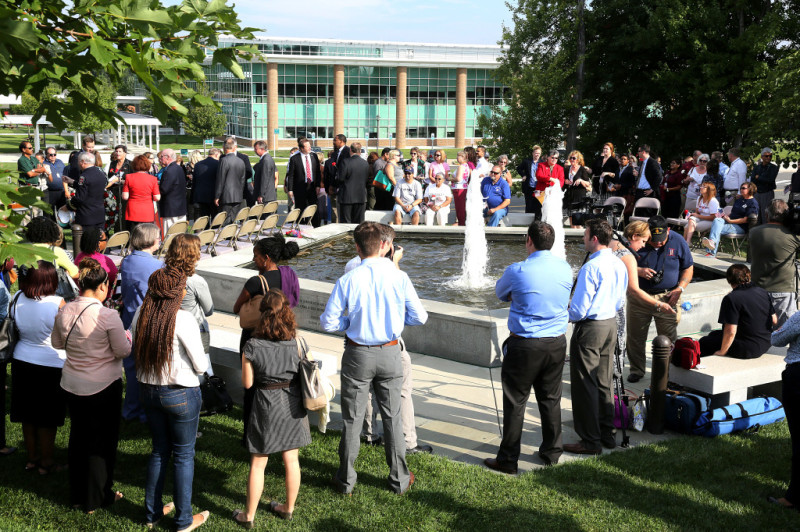 More than 250 people gathered for a 9-11 remembrance ceremony this morning, Sept. 11, at the Liberty Memorial located at the Prince William County Complex.

Prince William Board of County Supervisor’s Chairman Corey A. Stewart spoke at the ceremony. “Today, we come together as fellow Americans gathering to share in the memory of a day that changed our lives forever. As a nation and as individuals, the events of 9-11 had a tremendous impact. We are stronger and have shown that in adversity Americans band together, forgetting our differences and uniting in our common goals. May we never forget the tragic events of September 11, 2001, and the innocent lives that were lost that fateful day.”

Stewart went on to speak of those county residents who died at Pentagon and in New York and Pennsylvania. “This memorial is inscribed with the names of the 22 residents killed from the Prince William area. These names belong to members of our community, whose families are part of our community, and whom we will forever honor and remember for their sacrifice. This memorial is dedicated to those residents and all those who lost their lives on September 11, 2001.”

Prince William Fire and Rescue Chaplain John O’Connor echoed Stewart’s sentiments in a prayer during the ceremony and noted that there should be a sense of gratitude for the first responders, firefighters, rescue personnel, members of the military and civilians, who sacrificed their time, their energy and even their lives. “They did this to save the lives of their very countrymen.”

Stewart read the names of the county residents who died on 9-11, and Prince William Fire and Rescue Lt. Jeff Howdyshell rang a ceremonial bell to remember those who died. The “Tolling of the Bell” is a fire service tradition and used in remembrance of fallen comrades.

In his benediction, O’Connor prayed that those present would never forget those who lost their loved ones on 9-11. “Let us also remember their families and their loved ones who must now carry on without them. Help us to carry forward their hopes, their dreams, their goodness and the love of those who left this world on September 11, 2001.”

The Liberty Memorial and the World Trade Center Steel Memorial is located on the grounds of the County Complex in between the Prince William Parkway and James J. McCoart Administration Building.