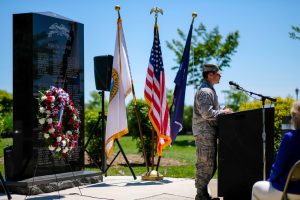 In a brief ceremony Tuesday, community members, county staff and county officials gathered at the War Memorial in Freedom Park, near the McCoart Government Center, for a joint commemoration of Armed Forces Day and Memorial Day, which both fall in May.

Prince William Chairman Corey A. Stewart spoke at the ceremony and said that Armed Forces Day was first observed in 1950 following the creation of the Department of Defense, which put all branches of the armed forces under one department. The purpose of Armed Forces Day was to establish a day to thank military members for their service. Memorial Day remembers those armed forces members who died in service to the country.

Stewart said the county recognizes those Prince William County residents who died while deployed in combat by etching their names on the War Memorial. There are now 124 names etched on the granite memorial. “Each one of these names represents a hero, a hero who died while serving their country, a hero who left behind those they love to protect us.”

This year, the name of Senior Chief Petty Officer Scott Dayton was added to the memorial. Dayton died Nov. 24, 2016, Thanksgiving Day, while serving in Syria. Dayton, 42, graduated from Potomac Senior High School in 1992. He was a 23-year veteran and received multiple military awards that included two Bronze Stars and the Purple Heart Medal. He left behind his wife, Kristin, and two children.

U.S. Air Force Lt. Col. Andrew Wonpat grew up with Dayton and spoke of him at the ceremony. “Like all of the names on this board, Scott was a brother among us, a warrior for us and a hero to all of us.”

Helen Rivas, Wonpat’s sister, said Dayton was like a “little brother” to them and she appreciated having his name added to the monument. “It’s actually very humbling because the county remembers. We grew up here and this is our stomping ground. Elementary, middle school, high school, the beginning of our lives started here, and it’s nice that the county remembers.”

Stewart urged people to remember all of the other names on the granite memorial and all those serving in the military. “We remember the men and women around the world who still serve our nation. At the same time, we hope and pray that all the Prince William County residents, and indeed all of our armed forces serving throughout the world, will stay safe and soon come home to their families and loved ones.  May we honor our many veterans and those in the Armed Forces not just on this day, but every day. We will always remember … so we may never forget.”

Jennifer Decker sang the “Star-Spangled Banner” and “God Bless America” during the ceremony, which ended with Donna Flory playing “Taps” on the bugle.