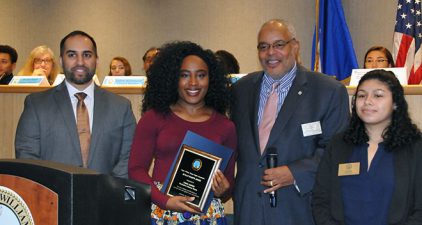 The Prince William County Human Rights Commission recently held its annual Universal Human Rights Day Celebration to recognize those within the community who promote the principles of human rights.

Neabsco District Supervisor John D. Jenkins welcomed everyone to the event on behalf of the Prince William Board of County Supervisors. “We all on the board join you in our support of the human rights effort in the county. These people that we honor today are people that have been nominated … throughout the entire county and their qualifications have been recognized.”

The 2017 Human Rights Award recipients are:

Rabbi Israel Zoberman, of congregation Beth Chaverim in Virginia Beach, spoke at the event and said that human dignity is “one and indivisible” and that people recognized at the awards ceremony represented the principles of Dr. Martin Luther King, Jr.

The mission of the Prince William County Human Rights Office is “to eliminate discrimination through civil and human rights law enforcement and to establish equal opportunity for all persons within the county through advocacy and education.” More information about the Human Rights Office can be found at pwcgov.org/humanrights.