Jim and Maureen Caddigan have spent over 50 years in Prince William County, raising a family while involved in public service. Jim served as a colonel in the U.S. Army before working as a government contractor. His wife, Maureen, served on a local school board and on the Board of Prince William County Supervisors. Married since 1959 and now in their golden years, the Caddigans settled into HarborChase Prince William Commons in Woodbridge.

“It’s the best thing that has happened to us,” Maureen said.

Jim agrees. “I haven’t seen anything else that compares,” he said.

The couple came to HarborChase Prince William Commons last summer, after an extensive search of assisted living facilities in Maryland, Delaware and Northern Virginia. When they visited HarborChase, they knew they were home.

“This is not a nursing home,” Maureen said.

“It’s anything but,” Jim agreed.

The couple said they are overwhelmed by the kindness of the staff, the excellence of the services, and the variety of amenities offered. Jim enthusiastically explained that the campus offers a hair salon, library, art studio, bistro, dining room, bus service, weekly happy hours, live music, cleaning service, and more.

The best part? “The people, the care, the staff,” Maureen said.

The Caddigans require different levels of assistance but live independently. Maureen admitted that, as a mother of four, she never enjoyed cooking. “We have a wonderful chef,” she said about HarborChase. “I don’t have to cook–that’s what I love.”

“Marriott with doctors”–that’s what Jim said his son calls their new home. It’s easy to see why. The vibrant and comfortable decor, cordial staff and friendly residents exude a vacation vibe to observers. 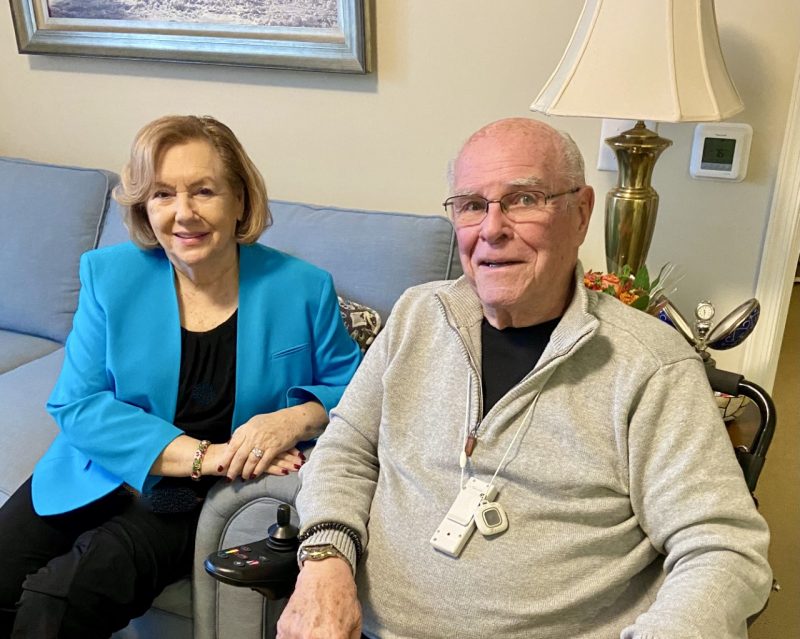 The Caddigans have called Prince William County home for decades, and each have left an indelible mark on the community. Maureen got teary-eyed sharing a story about her work to get a local high school built in the county. A trip down memory lane through beautifully arranged photo albums on their living room table boast of the many dignitaries, events and achievements Maureen has seen. Jim’s numerous military awards from his illustrious career are proudly displayed in a beautiful shadow box nearby. The couple stop and greet every person they pass in the hall, with hugs, handshakes and warmth.

Jim admitted the adjustment to HarborChase was minimal, and offered advice to anyone considering the facility. “Don’t wait,” he said. “Come as soon as possible.”

Maureen agreed, saying, “We have everything.”

Dawn Klavon is a contributing writer for Prince William Living.