It’s going to be a couple of years in the making, but at the end, the county will have the capability to handle yard, food scraps, brush, wood and agricultural waste more efficiently at its Ball Ford Road composting facility. 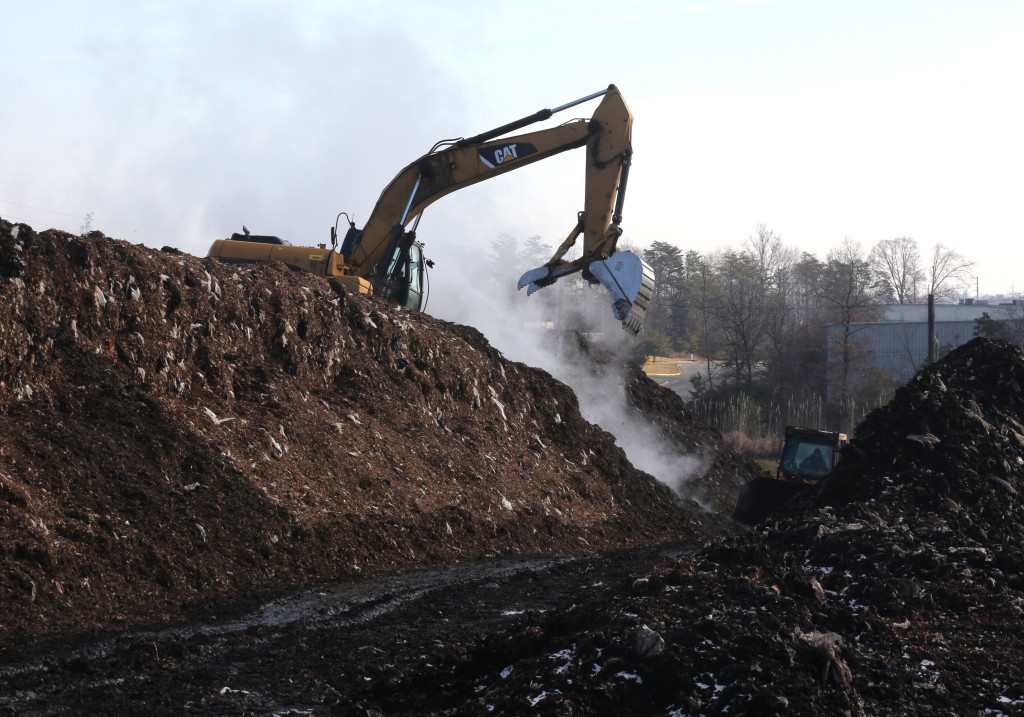 Heavy machinery is currently used to process organic waste at the Balls Ford Road composting facility. When the new facility is complete the waste will be handled more efficiently.

Currently, yard waste of leaves, grass and brush is piled high into long rows that have to be manually turned with heavy equipment. Smith said the new system will significantly decrease the time it takes to make compost. “The new facility will use an advanced aerobic composting technology where the leaves and grass will be mixed and placed in large bunkers. Those bunkers will have a series of pipes underneath so air can be drawn … through the piles. It will be constantly monitored by computers, so it’s a much more efficient operation. The process now takes six to nine months. Under this new system, we can have compost within 30 to 45 days.”

The air used in the bunkers will also pass through bio-filters to control any smell that might otherwise come off of the composting piles, Smith said.

Smith went on to say that collecting this type of waste, which would normally enter the landfill, would increase the landfill’s usefulness past its current lifespan of 2060. “Based upon studies we have done, approximately 30 percent of the waste going into the landfill is organics, leaves, grass, food waste, etc. If we can divert that waste into this facility to make usable products, we can increase the landfill life by 10 to 15 years.”

According to Smith, Freestate Farms will ultimately employ 20 to 25 people and invest roughly $10 million to build the facility without using county money. “There’s no county capital, so it’s definitely a public-private partnership that will benefit our county for a long time.”

The company will profit from the operation by charging commercial interests a “tip fee” on a per-ton basis. The company will also sell the compost, fertilizer and mulch it creates from organic waste. Residents will not be charged to drop off organic material and can purchase the products at competitive prices, Smith said.

Additionally, the company will begin collecting food waste to be recycled and converted into fertilizer and biogas. Biogas refers to a mixture of different gases produced by the breakdown of organic matter when there isn’t oxygen. This process of turning food waste into compost creates methane, which the contractor will trap and use to power the facility and heat a greenhouse that is planned at the site.

When it’s finished, the new operation will recycle more than 80,000 tons of organic waste per year, Smith said.