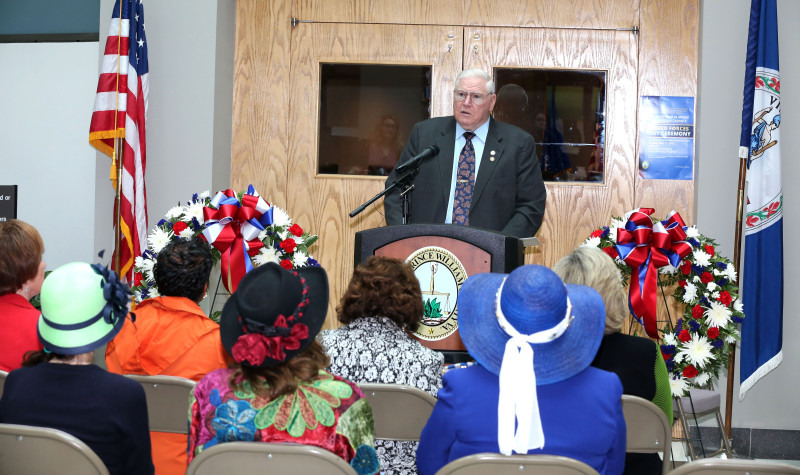 Prince William County residents, elected officials and county government staff members gathered in the atrium of the McCoart Government Building on Tuesday to commemorate Armed Forces Day and remember the men and women who served and died for our country.

Bugler Donna Flory opened the observance with a call to order, and Jennifer Decker, of the Hylton Performing Arts Center, sang the national anthem and “God Bless America” during the ceremony. Neabsco District Supervisor and retired Army Lieutenant Colonel John D. Jenkins spoke about remembering those who lost their lives in service. “Each year, we gather here to honor the brave men and women from Prince William County who have made the ultimate sacrifice for the freedoms we all enjoy every day. It is also a day to remember and appreciate all those still serving our military here in our community and around the world.”

Armed Forces Day was first observed in 1950 following the creation of the Department of Defense in 1949, which put all of the country’s armed forces under one department.

Flanked by two carnation wreaths to be placed at Freedom Park, Jenkins made note of the large military presence in the county with the Marine Corp Museum, Quantico and several service organizations, like the VFW, Disabled American Veterans and the American Legion.

A black, granite monument, which stands at Freedom Park, bears the names of those Prince William County residents who died serving in war. This summer, Jenkins said, a name will be added to the monument.  Willie Samuel Brown registered on June 5, 1917, to go and fight in WWI in France. Pvt. Brown died as a result of wounds received in battle on July 26, 1918.

“We are grateful that we will have this opportunity to honor Pvt. Brown,” said Jenkins. He went on to close the ceremony by saying, “May we honor the many veterans and those in the armed forces, not just on this day, but every day. We will always remember…so we may never forget.”

Freedom Park is located between the McCoart Government Complex and the Prince William Parkway. It is next to the Liberty Memorial, the county’s memorial to honor and remember those county residents who died on Sept. 11, 2001.