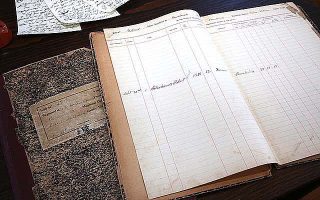 The 1902 poll books from Prince William County’s Brentsville District – some labeled “Colored” and others labeled “White” – came away with a $2,000 prize as part of the Virginia Association of Museums’ contest of Top 10 Endangered Artifacts for 2017. The public was asked to vote online for their favorite artifact. The poll books came in fourth in the competition, and the money received will go toward restoring the books.

Prince William Preservationist Sarah Nucci said the process to get the books restored is beginning now that the results are in. “We need to have a conservator look at them to give us a price and exactly how much we can get done. They need to be rebound, and they will need to stabilize some of the cardboard on the covers.”

Once the books are restored, they will probably be publicly displayed, Nucci said. “We would expect that they will be displayed at the Brentsville Courthouse,” she said. “Our plan right now is to preserve them and put them on display during the part of the year when the courthouse is open.”

The books represent one of the first opportunities for African American men to vote, but having the names written in segregated books also shows the state-sponsored voter disenfranchisement of African Americans that lasted until the Voting Rights Act of 1965.

The artifacts that outpaced the poll books in the public voting included rare discs of radio recordings of country music pioneer Ralph Stanley and the Clinch Mountain Boys, circa early 1950s held at the Birthplace of Country Music in Bristol; an 18th-Century merchant ship, circa 1750s to 1800, excavated at the site of the new Hotel Indigo in Alexandria; and a segregated-era “colored” sink from the African-American Historical Society of Portsmouth that exemplified the “separate but equal” life under the Jim Crow laws in the south.

For more information about the county’s historic properties, visit pwcgov.org/history.