Founded in 2002 in Prince William County, the Creative and Performing Arts Center Inc. (‘CAPAC’), a 501(c)(3)
non-profit charity, was created to provide people of all ages with an outlet to develop the extraordinary art that emphasizes the rich culture and ethnic traditions of people of color. With the understanding of the need to fill a void for cultural diversity in the performing and visual arts in the Greater Prince William County area, CAPAC created an organization to provide year-round performing and visual arts programs. CAPAC is governed by a board of directors that includes Loretta Freeman, president; Jacqui West, vice president; Melissa Davis, secretary; Bettie Roberts, treasurer; Sheila Anderson, Jean Gary, LaTonya Jackson, Shennell January, Ph.D., Eric Johnson, Vernell Lewis, Desirea Moore-Mitchell, Yvette Pile, Elizabeth Price and Lewis E. Turner, Jr.

Joy and Learning through Performances

From ages 5 to 105, all are welcome to come and take part in the acting, singing, dancing and art workshops with CAPAC. These workshops are the makings of the theatrical productions CAPAC students have performed since its formation. “Over the last 17 years, we have brought a variety of productions to the stage, from comedies to dramas to plays for children, youth and families,” said Denise M. McPhail, co-founder and executive director of CAPAC. “In addition, our performances have provided exposure
to multicultural arts that many young people in our region would not have experienced otherwise.”

In 2012, CAPAC presented legendary choreographer, dancer and actress Debbie Allen’s Dancing in the Wings over four nights at the Hylton Performing Arts Center. Other performances over the years include a presentation of Remembering Angels in Birmingham at the grand opening of the Hylton Performing Arts
Center in 2010. This performance was of an original script written by professional actor and Prince William County native Albert Williams.

In 2016, CAPAC developed a partnership with Charles Colgan High School, Center for the Fine and Performing Arts in Manassas. Most recently, “we worked with students to research, write, produce and put on a historical play, The Courageous Four, for Black History Month,” said McPhail. “It was the story of four
African-American educators—Zella Brown, Maxine Coleman, Fannie Fitzgerald and Mary Porter—who were selected to integrate the Prince William County Public School System by being re-assigned to all white elementary schools.”
Each year, in honor of Black History Month, CAPAC offers a production and/or a student master class. Plans for 2020 include a dramaturgy master class that will encourage students to consider researching, writing, and editing as well as consulting with authors, script interpreters, and others.

Jawuan Hill, a CAPAC student, said of the organization, “CAPAC inspired me in many ways to become the artist that I am today. This organization gave me a firsthand experience of the professional aspect of theater and theater etiquette. They [CAPAC] also pushed me to become a better person and artist with many different techniques and mentors. I will forever thank the Creative and Performing Arts Center for helping me find my passion.” Hill was accepted to study theater at The British American Drama Academy for the Midsummer Conservatory Program 2019. The program was held at St. John’s College, Oxford University, England.

Other students who have performed with CAPAC have gone on to study at the Duke Ellington School for the Arts in Washington, D.C. while “the young man who played the Wiz in our 2014 production of The Wiz, Rayshun LaMarr, made it to number 8 as a contestant on NBC’s The Voice,” said McPhail.

Giving Back to the Community 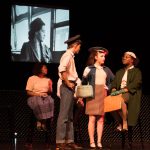 CAPAC believes in giving back to the community, which is evident in the thought put in to each production. “For the production of Shakin’ the Mess Outta Misery by Shay Youngblood and directed by Crystal Arful-Addoh, CAPAC partnered with the Cabin Branch Quilters to present 32 quilts to the neonatal intensive care unit at the now-Sentara Hospital,” said McPhail.

“For other performances, CAPAC has hosted food drives to benefit local food pantries and provided opportunities for underprivileged youth to attend performances,” she said.

CAPAC dealt with issues that are very prevalent in today’s society with its presentation of Ntozake Shange’s For Colored Girls. The play addresses subjects of suicide, racism, sexism, rape, powerlessness and male domination and the girls who have considered suicide because of this. For this performance, CAPAC
partnered with local psychiatrists and therapists to address the subjects identified in the theatrical performance, allowing for post-performance discussions.

An Exciting Future with Lots to Offer

CAPAC is a membership-based organization and invites supporters to participate in an annual membership program at capacweb.org. Support can also be given by clicking CAPAC Inc. before shopping on Amazon Smile. CAPAC is also currently seeking sponsors and vendors to support CAPAC’s 2nd Jazz in the Park fundraiser as well as a corporate sponsor to launch a second fundraiser to support professional women and girls.

Upcoming events include: The Violin Master Class with Dr. Chelsey Green and the Green Project for students in 6th through 12th grades on Saturday, Sept. 7, 2019, from 10 a.m. to 12 p.m. at the Mary Louise Jackson Amphitheater on the campus of Northern Virginia Community College in Manassas, Virginia (rain date: Sept. 14).

On Sept. 7, 2019 (rain date Sept. 14), Jazz in the Park will begin at 1 p.m. Artist Marcus Johnson will be the headliner. Also featured will be Chelsey Green (a violinist who performed at Carnegie Hall at the age of 16), David Bach Consort and Rahmat Shabazz.

On Dec. 6 at 7 p.m., CAPAC will perform Langston Hughes’ Black Nativity at the Hylton Performing Arts Center located on George Mason University’s Science and Technology Campus in Manassas. Black Nativity is presented by special arrangement with The Dramatic Publishing Company of Woodstock, Illinois.

Visit CAPAC’s website to learn which children’s production the organization will produce Feb. 29, March 1, March 7 and 8 at the Hylton Performing Arts Center. Each performance will begin at 3 p.m.

“As the co-founder/executive director of CAPAC, over the past 17 years, there have been many supporters instrumental in our success. Regardless of the type of role you’ve played, if you have contributed to CAPAC in any way since our inception, I would like to take this opportunity to thank you for your support of our growth,” McPhail said.

“If you have not been a part of CAPAC’s growth, we invite you to consider joining us,” she said. “There is a role waiting, just for you.”

Additional information about CAPAC can be found at capacweb.org, or alternatively follow Creative and Performing Arts Center on Facebook.

Olivia Overman ([email protected]) is a freelance writer for both online and print organizations. She earned an M.A. in Journalism and Public Affairs from American University, Washington DC.