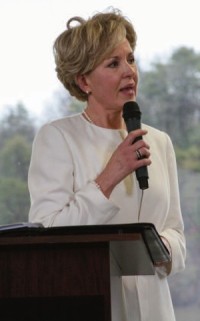 Dalena Kanouse found herself, unexpectedly, answering the question, “Where does the company go when there’s no CEO?”

Following a 25-year career in the Army National Guard, her husband Sam Kanouse began building Management and  Training Consultants, Inc. (MTCI) in 1999 as a way to give back to the military community. While the company, now located in Manassas, has expanded over the years, an initial and ongoing focus is equipping veterans with tools to combat the stress inherent in their career transitions.

In October 2009, Sam died from leukemia, and overnight Dalena was at the helm of a national contracting ﬁrm that she knew little about. However, she was determined to carry on her husband’s legacy.

One way Kanouse does this is through a focus on hiring military veterans. More than 76 percent of the company’s associates are veterans, she reported. Of those, 50 percent are retirees and 26 percent are combat veterans. The company also includes family members of military personnel.

Kanouse sat down with Prince William Living to discuss her journey as the owner and CEO of MTCI.

PWL: When and how did the company begin?

Kanouse: Sam, a retired, full-time Army National Guard Sergeant Major … started a one-man training company in the basement of our home … oﬀ Route 234 in the Ashland community. All he had in this unﬁnished basement was a computer, a telephone, a desk and a very large whiteboard. After not quite a year, he got his ﬁrst contract. We still have that ﬂagship contract today. … We have approximately 105 associates and we are in 25 states now.

We try to maximize human potential, and that is our motto.

Through training, we help military personnel transition. … My husband built the company on core values of loyalty, integrity, faith-based ethics, selﬂess service, personal courage, care for our people, honor, respect and civic responsibility. We base the company on those core values very much and take them to heart.

PWL: Did you ever think you would become an entrepreneur?

Kanouse: I had my own career. I was a Department of the Army civilian employee for 19 years; 16 of those years was with public aﬀairs. I never worked with ﬁnances; never worked with marketing, only to an extent.

At Fort Hood, I was Chief of Community Relations and loved it. I wanted to work with Sam when I retired from the government.… We had a relationship where we could be around each other all day, and it not bother us. But that didn’t happen. Never ever in my wildest dream did I ever think I would be an owner of a company.

PWL: What was a turning point when you knew changes were ahead?

Kanouse: Through the whole time he was sick, 16 months, not once did we talk about me taking over the company. … [His] dying was not an option. It wasn’t until the day before he passed away, as sick as he was, I found him on the computer typing my job description. Later he had me print it out and read it to him word for word because he wanted me to know what I was going to be responsible for.

PWL: What challenges did the business experience with the change of ownership?

Kanouse: We are a resilient company for sure. … When Sam passed away, overnight we lost our … [federal contracting]status. We went from a service-disabled, veteran-owned, 8A company to a woman-owned company overnight, and they

[woman-owned companies] don’t have the same advantages. … We lost all the contracts that were connected to the 8A status. It was a challenge, but I was determined that wasn’t going to aﬀect the company.

PWL: What personal challenges have you overcome? Kanouse: I’m still learning federal contracting. But the hardest thing I had to learn is that I didn’t have to know everything. You just have to have the right people. And [the associates]have been phenomenal, and I would not do everything I do every day without  them.

The challenge I had was to be able to step into shoes I’d never worn before and … do the things that are required of an owner. I must say, I must be doing something right because I’m still here, and we’re still thriving.

PWL:  Have you received public awards or designations that have enhanced the MTCI image?

Kanouse: We are ISO [International Organization for Standardization] 9001:2008 certiﬁed, Women’s Business Enterprise National Council certiﬁed and we are working on our certiﬁcation through the International Association for

Continuing Education and Training. We’ve also received an award from [Inc. 500|5000] for the fastest-growing private companies [in the U.S.]MTCI won that award in 2007, when my husband was here, and again in 2010.

We just found out that we are a ﬁnalist for the GOVstar Award. GOVstar honors local government contracting ﬁrms for their technology, innovation, workplace environment, growth, veteran support and contributions to the marketplace and industry. We will know in October if we get it.

And then, of course, recently being named the 2012-2013 [Prince William] Chamber Member of the Year was wonderful.… So much has come from us attending [chamber]networking opportunities. We have met teaming partners and potential teaming partners, allowing us to pool talent to pursue contracts.… That’s why giving back to the chamber is not hard for us.

PWL: What is your future vision for MTCI?

Kanouse: Penetrating the private sector more as well as reaching

out to additional federal agencies. I want to see MTCI thrive so

my husband can look down and say, “You’ve done a great job,” and be proud of what we’ve continued with his vision. It’s not about the bottom dollar; it’s about getting strong and being that competitive company.

PWL: What advice would you give others considering starting a company?

Kanouse: For couples, all I can say is talk to each other. Really communicate your desires. Make sure you know each other’s goals. We communicated daily, but not about company details.

If I had known he wanted me to take over his company, maybe it would have made it a little easier. My husband and I put everything in a trust, and that really helped. I just know because of the trust we didn’t have to go through probate, and it was overnight that I became owner.

Finally, have the passion to do it. Have the drive. Have the vision. That’s what is going to make it.

A former nonproﬁt development director for more than 10 years, Jennifer Rader provides freelance writing while studying nutrition and preparing for her massage therapy certiﬁcation. She lives with her son and husband in Manassas and can be reached at jrader@princewilliamliving.com.